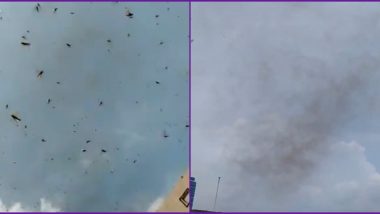 The problem of locusts attack in the country seems to give no respite to the farmers as another region has been targetted by the swarms of Tiddi Dal. Videos of locusts in Lucknow, the capital city of Uttar Pradesh have been shared on Twitter. While some are still confirming on the location, others are sharing more pictures and videos. There has not been any official confirmation from authorities as yet if these videos are from Lucknow. Meanwhile, the buzz on Twitter is growing. #LocustsAttack is trending on Twitter with more such videos. Jhansi, Chitrakoot, Prayagraj, Pratapgarh, Bhadohi, Azamgarh and Ambedkar Nagar are other districts in Uttar Pradesh that have been dealing with locust attacks just last month.

This year India is facing the worst invasion of these insects which destroy acres of crops with their infestation. Just two weeks ago, these swarms of desert locusts were seen in Gurugram as well. Some of the affected states include Rajasthan, Madhya Pradesh, Punjab, Haryana, Maharashtra. Usually seen around the farm regions, the swarms have also entered the cities, and the latest being Lucknow as per the latest videos online. In some places, people banged utensils, drums and made noise to drive these insects away. Drones have been used in the past to spray pesticides on these swarms.

Swarms of locusts arrive in Lucknow.

The videos sure look scary. It is yet to be ascertained by authorities. But people on Twitter are advising everyone to keep their windows and doors shut. As the country already battles with a crisis of Coronavirus, the locust attack has been a problem since months.

(The above story first appeared on LatestLY on Jul 12, 2020 02:46 PM IST. For more news and updates on politics, world, sports, entertainment and lifestyle, log on to our website latestly.com).