The floodwaters have affected the animals significantly as efforts to rescue them continues. On social media, heartbreaking pictures and videos show how animals such as the rhinos, deer and elephants, among others are struggling to escape from the devastating floods. 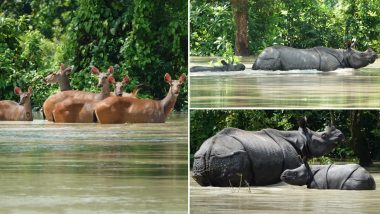 Assam flood situation continues to remain grim. The death toll due to floods is rising rapidly, and the dame it has done to life and property is unimaginable. At the time when the nation is battling the coronavirus crisis, the devastating flood situation in Assam is making it worse. It is not only coronavirus, but the northeastern state is also struggling with floods that have displaced people and animals at large. The statistics state that the death toll is rampant in economically weak communities. Assam floods have left 80 percent of Kaziranga National Park submerged underwater. The floodwaters have affected the animals significantly as efforts to rescue them continues. On social media, heartbreaking pictures and videos show how animals such as the rhinos, deer and elephants, among others are struggling to escape from the devastating floods. Assam Floods: 59 Dead, Around 45,40,890 Affected Across 30 Districts, Situation Continues to Remain Grim.

The northeastern state of India is at considerable risk. The flood situation worsens every year, worrying the home to tigers, deer and one-horned rhinos. According to the latest reports, about 80 percent of the National Park is submerged in water. P Sivakumar, the Director of Kaziranga National Park reported ANI that so far, 66 animals have died and 170 animals were rescued. Officials further reported that many tigers and rhinos had strayed into the nearby villages due to flooding in their habitats. Pictures and videos doing rounds on the internet show the devastation created by the floods in Assam, and it is distressing.

Pics of Rhinos and Deer Trying to Escape the Waterlogged National Park:

Watch Video: Anti-Poaching Camps Are Inundated at the Park

Assam Floods:95 per cent of anti-poaching camps are inundated at the #Kaziranga National Park.

47 animals died so far due to flood related incidents and 70 have been rescued by the park authorities.

A female rhino calf was separated from her mother due to high flood in the Agartoli range yesterday. As we could not locate the mother, team CWRC along with @kaziranga_ staffs rescued it and currently under care at our rescue centre-CWRC. @ParimalSuklaba1 @wti_org_India pic.twitter.com/LLPHrDPQ8Z

Here a huge #elephant family crossing a road during floods for safely moving towards higher elevation at @kaziranga_. Do remember to give them space & time to cross roads. Drive slowly inside wildlife areas during monsoon. Help in spreading the message. pic.twitter.com/HdLNygcgZ0

Large swathes of land have been submerged in 26 of Assam’s 33 districts affecting lakhs of people. Sixty-six animals including two rhinos, have died in the floods in Kaziranga. Flood is an annual occurrence in Assam. Each year, the monsoon floods inundate the national park forcing animals to leave the park and head towards the nearby hills Karbi Anglong district by crossing National Highway-37 that passes near the park's boundary. As per reports, this year’s large-scale inundation has taken place due to breaches in the network of embankments along the Brahmaputra and its tributaries. This is a difficult situation for Assam, and the rescue operations across the state are on.

(The above story first appeared on LatestLY on Jul 16, 2020 12:54 PM IST. For more news and updates on politics, world, sports, entertainment and lifestyle, log on to our website latestly.com).