Australian GP Organisers Issue Stern Warning to Lewis Hamilton & Other F1 Drivers to Get Fully Vaccinated, Says ‘There Won’t Be Any Exemptions’ 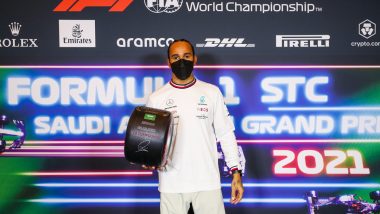 The Australian GP has not taken place for the last two years. But in 2022 will return to the paddock. The event will take place from April 8-10 at the  Melbourne Grand Prix Circuit. Ahead of the tournament, the organisers have issued a stern warning to all the racers to get fully vaccinated as there is no scope of the exemption. The organisers also said that if the racers test positive, they don't get to race that weekend. The Australian GP is the third race in the Formula 1 2022 calendar. 50,000 Lewis Hamilton Fans Sign a Petition Asking FIA To Overturn Results of Abu Dhabi Grand Prix 2021.

Chief executive Andrew Westacott explained the rules of the event and asked the racers to get fully vaccinated, “The rules are simple to get into the country and the rules are simple to operate in Formula One. To come into the event you’ll be 100 percent vaccinated and there won’t be an exemption sought for anyone from anyone." Westacott further opined that the rules are even understood by FIA. On a concluding note he also spoke about the zero-tolerance policy and said, "There’s zero-tolerance. Whether you’re Lewis Hamilton or Valentino Rossi in MotoGP, if you test positive, you don’t race that weekend."

(The above story first appeared on LatestLY on Jan 25, 2022 05:41 PM IST. For more news and updates on politics, world, sports, entertainment and lifestyle, log on to our website latestly.com).