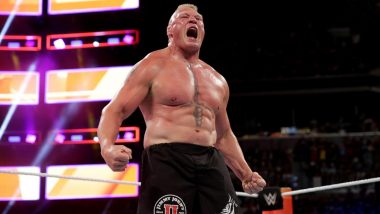 WWE superstar Brock Lesnar gets accused of sexual harassment by former wrestler Terri Runnels. The legendary diva Rennels made this claim in the wake of #SpeakingOut movement in the USA. This hashtag space is being used on social media by those who have been victimised by those within the professional wrestling industry. Wrestling companies like WWE, AEW and TNA are taking actions against wrestlers and looking into the matter whose name has popped out in this movement. #SpeakingOut Movement: WWE Releases Superstar Jack Gallagher After Sexual Assault Allegations Surface Online.

Terri Runnels started her career with WCW as Miss Alexandra York, the manager of the York Foundation. She later joined WWE and worked in this company for eight years. Runnels was also the manager of Goldust, who is her ex-husband. In a recent sports podcast with KEE on Sunday, June 21, 2020, Terri Runnels stated referring to Brock Lesnar that, 'He showed his p***s to me and called my name as I was walking past where he was in the dressing room and opened his towel so I could see his manly bits'. WWE Raw June 22, 2020 Results and Highlights: Dolph Ziggler Challenges Drew McIntyre For Title Match; Big Show Confronts Randy Orton & Ric Flair (View Pics)

Terri Runnels also went on to say that Brock Lesnar used to take undue advantage of his power in WWE at that time and never showed respect to fans and fellow wrestlers. Runnels had previously spoken about this incident in an interview in the year 2004, however, in the wake of #SpeakingOut movement, she spoke about it again.  Brock Lesnar is yet to come under scrutiny by WWE. The wrestling company is expected to look into this matter soon, as they have previously stated that misconduct by any professional wrestler will not be tolerated and there will be strict action against the said player if found guilty.

WWE has already sacked Jack Gallagher for sexual misconduct. AEW has also suspended Sammy Guevera for his comments about Sasha Banks, where the wrestler stated that he wanted to rape her. Famous wrestling star Matt Riddle name has also come out in #SpeakingOut movement, however, the SmackDown star has released a statement through a lawyer denying the allegations. Speaking about Brock Lesnar from the professional front, he was last seen in action against Drew McIntyre at WrestleMania 36, where he lost the match to lose WWE title.

(The above story first appeared on LatestLY on Jun 24, 2020 09:15 PM IST. For more news and updates on politics, world, sports, entertainment and lifestyle, log on to our website latestly.com).