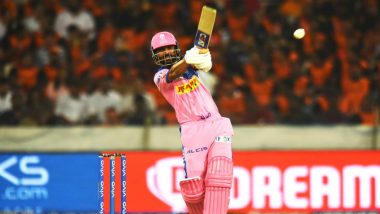 Mumbai, August 5: India's Test vice-captain Ajinkya Rahane took to social media on Wednesday to share his excitement at the prospect of playing for Delhi Capitals this season in the Indian Premier League (IPL). Rahane was traded by Rajasthan Royals to Delhi Capitals in November last year.

The BCCI will be organising the 13th edition of the IPL at three venues -- Dubai, Abu Dhabi and Sharjah -- from September 19 to November 10 after it was postponed from March due to the COVID-19 pandemic.

"New beginnings for me in the @ipl this year. Looking forward to the season," Rahane said in an Instagram post along with a photo of him batting. Ahead of IPL 2020, Delhi Capitals Captain Shreyas Iyer Issues Warning to Other Teams, Says 'We're Coming'.

New beginnings for me in the @ipl this year. Looking forward to the season @delhicapitals #ipl2020

Rahane has been with the Royals since 2011 and was the franchise's most capped player having played 106 matches, six of which were Champions League games. He even captained the Royals in 24 games, winning nine and losing 24. Recently, Rahane said players will get used to the Covid-19 protocols in 2-3 days once they touchdown in the UAE for the IPL.

"We will definitely miss our fans. Fans are everything to us. When they come out and support us in the stadiums, it feels really good, inspires us to do well," Rahane said during a TV show.

"Again, you got to think about their health and safety as well. We will miss them in the stadium. We are going to play for them, for our fans. I am sure they will enjoy watching us on TV," he added.

(The above story first appeared on LatestLY on Aug 05, 2020 08:38 PM IST. For more news and updates on politics, world, sports, entertainment and lifestyle, log on to our website latestly.com).