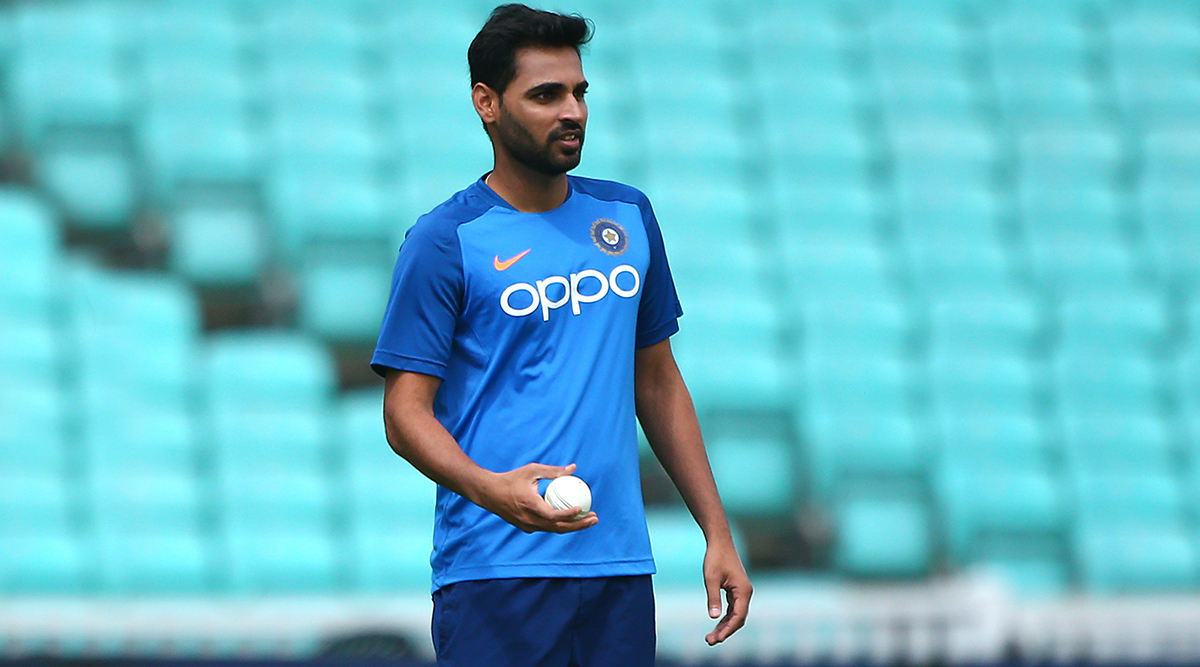 In what should come as a major injury blow to the Indian cricket team, Bhuvneshwar Kumar is reportedly ruled out of the 1st ODI between India and West Indies in Chennai. Bhuvi, who marked his return to the Indian cricket team in the three-match T20I series against West Indies after missing successive series against South Africa and Bangladesh, apparently complained of pain during the 3rd and series-deciding IND vs WI T20I match and is out from the 1st India vs West Indies ODI  match. Kumar, if true, could become the second after player Shikhar Dhawan to drop out of the original squad announced for the West Indies ODI series. India vs West Indies ODI series starts on December 15. Virat Kohli Praises Indian Pacers, Says Bhuvneshwar Kumar and Jasprit Bumrah Experienced and Mohammad Shami Will Be Useful in Australia.

Dhawan dropped out of the entire West Indies limited-overs series after sustaining a knee dash during a Ranji Trophy match for Delhi and was subsequently replaced by Mayank Agarwal in the ODI squad. Meanwhile, although the BCCI is yet to confirm the news of Bhuvneshwar Kumar’s injury and its extent, news speculated suggests that the fast bowler could be ruled out of the entire West Indies ODI series. ESPNCricinfo, reported that the selectors are awaiting a final word from the team India medical staff and would only name a replacement after being informed about the extent of Bhuvi’s injury. Reports also claimed that Navdeep Saini, Khaleel Ahmed and Shradul Thakur are in contention to be picked as the replacement. Jasprit Bumrah to Bowl Against Virat Kohli and Rohit Sharma in Visakhapatnam Team Management to Check His Recovery From Back Stress Fracture.

According to a report from Mumbai Mirror, Bhuvneshwar first fell discomfort during the 3rd and final T20I match against West Indies and informed the team’s medical staff about his problem following India’s 67-run win that helped them clinch the T20I series 2-1. Kumar had made his return into the Indian team after missing the South Africa and Bangladesh series with a hamstring pull and side strain and played all the three Twenty20 International matches against the West Indies.

The injury, therefore, could come as a severe setback 29-year-old, who has often struggled with concurrent injuries in the recent past. In the 2019 ICC Cricket World Cup, Kumar had to limp off the crunch clash against Pakistan after just 2.4 overs due to hamstring pull and although he made a comeback in the semi-finals against New Zealand and played following series against West Indies, Kumar had to sit out of the home series against South Africa and Bangladesh

India kickstart their three-match ODI series against the West Indies on December 15 with the 1st ODI match in Chennai. India have already reached Chennai for the game and will hope to complete a whitewash West Indies in the limited-overs series.