Brad Hogg Weighs In on Virat Kohli’s Removal As India’s ODI Captain, Hopes That ‘Change Room Is Not Separated’ After This Decision

The former Australian leg-spinner was of the opinion that this decision made by the BCCI is actually a 'blessing in disguise' for Kohli as it would relieve him of a lot of pressure so that he can focus on his batting and leading the Test team. 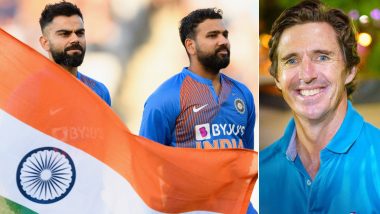 The BCCI taking away the ODI captaincy from Virat Kohli and handing it over to Rohit Sharma has been a topic of much discussion till now and former Australian cricketer Brad Hogg hopes that this decision does not have an impact on the dressing room. Hogg seemed to have supported this decision and explained that it would relieve Kohli of a lot of pressure and he can then solely focus on leading in Test cricket. Virat Kohli Was Not Given Respect by BCCI, Says Former Pakistan Spinner Danish Kaneria After 33-Year Old’s Removal As ODI Captain

In a video on his YouTube channel, Hogg, while reacting to this decision, said, "I think it's a blessing in disguise. I just hope when they go on their next tour, that change room is not separated by this little slight division between these two particular players. Both of them have to embrace it, get in that changing room, and take Indian cricket forward. That's because Indian cricket right now, with the talent they've got in batting and bowling should dominate world cricket over the next five years at least."

Kohli had earlier given up T20I captaincy in order to manage his workload. He then subsequently went on to relinquish captaincy of his IPL team, Royal Challengers Bangalore. Hogg firmly believes that this decision would be a good one for Kohli, who has not had much of a productive time with the bat in hand in the past two years or so. " I think this is a good move. Kohli should just embrace it and relax about the whole situation and should concentrate on captaining the Test team. So basically you've got Rohit Sharma just concentrating on the team he wants in white-ball cricket and Virat Kohli focusing on Test cricket. It takes a lot of pressure off you. The media hype off the field all of a sudden relaxes and Virat Kohli's only got to worry about the Test environment."

"Whereas Rohit Sharma has only got to worry about the white-ball environment plus all the sponsorship and other commitments off the field. I think this is going to be better for Virat Kohli. It is going to improve his performances which have slightly dropped off slightly in the last couple of years when he's been under pressure while captaining all three teams," he added.

Kohli and Rohit Sharma would be seen as different format captains for the first time when India tour South Africa for three Tests and as many ODIs later this year. Fans would be eager to see how Kohli the batsman performs in India's limited-overs setup this time.

(The above story first appeared on LatestLY on Dec 12, 2021 12:20 PM IST. For more news and updates on politics, world, sports, entertainment and lifestyle, log on to our website latestly.com).