With Mitchell Marsh and Rishabh Pant dealing in boundaries, Delhi Capitals were in contention to chase the huge target set by Chennai Super Kings but Moeen Ali's three wickets in a miserly spell turned the game on its head, leading MS Dhoni's side to massive win in the 55th match of the IPL 2022. 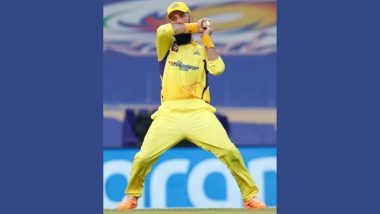 Mumbai, May 9: With Mitchell Marsh and Rishabh Pant dealing in boundaries, Delhi Capitals were in contention to chase the huge target set by Chennai Super Kings but Moeen Ali's three wickets in a miserly spell turned the game on its head, leading MS Dhoni's side to massive win in the 55th match of the IPL 2022. The England cricketer has had a 'blow hot and cold' season so far, but he was at his best with the ball against Delhi. Chasing a huge target, Delhi lost the wicket of KS Bharat (8) -- playing in place of Prithvi Shaw as opener -- in the second over of the innings. MS Dhoni Becomes First Wicketkeeper to Complete 200 Catches in T20 Cricket, Achieves Feat During CSK vs DC IPL 2022.

However, his opening partner David Warner dealt in boundaries and sixes to keep the run rate intact. With runs flowing from Warner's bat, CSK skipper Dhoni brought Maheesh Theekshana and the spinner dismissed the Australian for 19, with the opener being struck on his back thigh after missing a reverse pull. But, Rishabh Pant scored three fours in the same over while Simarjeet was hit for a six by Marsh and a four by Pant. Between the two, the seven fours and the lone six kept Capitals in contention as they moved into the seventies. But then came the fall for Delhi, courtesy a sensational spell by Moeen Ali.

Marsh was Moeen's first wicket as the Australian miscued a slog to long-on, only to get caught on 25. The off-spinner then returned next over to pick up Pant with a chopped-on bowled dismissal and soon Ripal Patel holed out to deep midwicket as DC slipped to 81 for 5. A recovery from there was still possible, but a double-wicket over from the other end in the next over made the result a formality. Mukesh Choudhary picked up Axar Patel and Rovman Powell in the space of five balls in the 11th over. MS Dhoni Not Worried About CSK's IPL 2022 Playoff Chances, Says 'It’s Not the End of the World'.

From there on, CSK took firm control of the game. Shardul and Kuldeep Yadav batted for 27 deliveries together but they could only manage 14 in their partnership. Barring a few attractive shots from Thakur when it was too late, there was nothing more from Delhi in the batting in the last few overs of their innings. Dwayne Bravo picked the wickets of Thakur and Khaleel as Delhi were bowled out for 117 in 17.4 overs, losing by a huge margin of 91 runs. After the game, Moeen said that his primary job as offspinner is to spin the ball, and on Sunday's used wicket, he found that.

"We knew it would be a good score with the spinners we've got. We just stayed in the moment, in the present and got some nice shots in the end. I hurt my ankle a bit so had to change my action a bit, but it was probably for the best. My primary thing is to spin it as much as I can, the wickets are gripping a bit now," the off-spinner said. It was CSK's fourth win in the ongoing IPL season and they moved to the eighth spot, going above KKR on net run rate. The win also kept CSK alive for playoff contention, even though their chances depend on a lot of other results going their way plus they have to win their remaining three games. CSK will now take on bottom-placed Mumbai Indians on May 12 at the Wankhede Stadium.

(The above story first appeared on LatestLY on May 09, 2022 10:52 AM IST. For more news and updates on politics, world, sports, entertainment and lifestyle, log on to our website latestly.com).