CSK vs RCB Preview: Likely Playing XIs, Key Battles, Head to Head and Other Things You Need To Know About TATA IPL 2022 Match 22

RCB are in great form, having won three games on the trot following a defeat in their opening match. CSK meanwhile, have lost four successive games in this year's competition and are without a win. The defending champions will try hard to win their first points of the season. 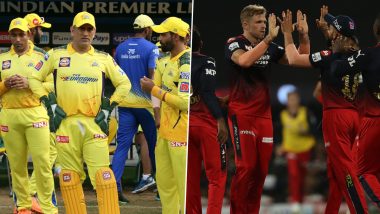 Chennai Super Kings will aim to bring about a change in their fortunes when they take on Royal Challengers Bangalore in match 22 of IPL 2022 on Tuesday, April 12. The match would be played at the DY Patil Stadium and is set to start at 7:30 pm IST (Indian Standard Time). The defending champions have had a nightmarish start to this year's IPL with four consecutive defeats in as many games and things are looking really bleak for the four-time champions. Ravindra Jadeja could not have asked for a worse start to his CSK captaincy career as the IPL 2022 champions are staring at a very difficult path for making it to the playoffs, although they have 10 games remaining. Bowling has been their weakest link in the team and Chennai are expected to make some changes when they face Royal Challengers Bangalore. India's U19 star Rajvardhan Hangargekar is expected to be handed his CSK debut. Yuzvendra Chahal Becomes Second-Fastest Bowler To Scalp 150 Wickets in IPL, Achieves Feat During RR vs LSG Clash

CSK face Royal Challengers Bangalore, a side brimming with confidence with three consecutive wins in four games. RCB have done well in all three departments this year and are looking like an early contender for a top-four spot in the competition. Faf du Plessis will face his former side, a team for which he has earned such a huge reputation in the IPL and he would hope to score big and make the occasion memorable. RCB's squad have been handed a significant boost with Josh Hazlewood and Jason Behrendorff joining their squad. It remains to be seen whether they make the playing XI or not. Josh Hazlewood, Jason Behrendorff Hit the Nets Ahead of CSK vs RCB Clash in IPL 2022 (See Pics)

Chennai Super Kings and Royal Challengers Bangalore have faced each other for a total of 28 times. CSK hold a clear advantage with 18 wins as compared to RCB's nine victories. One game between these two sides was a no result.

Chennai Super Kings will hope that the Robin Uthappa and Chris Jordan come good against RCB. For Royal Challengers Bangalore, Harshal Patel and Virat Kohli will be key players.

A CSK vs RCB clash in IPL always have had many interesting player battles and this time, it's no different. The duels between Robin Uthappa and Harshal Patel and Chris Jordan and Virat Kohli can have a say in the outcome of this fixture.

Chennai Super Kings vs Royal Challengers Bangalore (CSK vs RCB) match in IPL 2022 will be played at the DY Patil Stadium in Mumbai on April 12, 2022 (Tuesday). The game is scheduled to begin at 07:30 pm IST (Indian Standard Time). Toss will be held at 07:00 pm.

(The above story first appeared on LatestLY on Apr 11, 2022 10:26 AM IST. For more news and updates on politics, world, sports, entertainment and lifestyle, log on to our website latestly.com).