David Warner Had To Be Benched Due To Disciplinary Issues In IPL 2009, Says Virender Sehwag

Former India cricketer Virender Sehwag has revealed that Australian opening batter David Warner had disciplinary issues at Delhi Daredevils (now Delhi Capitals) in his first year with the franchise, and had to be sent back because of his attitude. 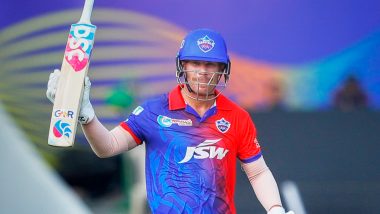 Mumbai, May 7: Former India cricketer Virender Sehwag has revealed that Australian opening batter David Warner had disciplinary issues at Delhi Daredevils (now Delhi Capitals) in his first year with the franchise, and had to be sent back because of his attitude. Warner, 35, began his stint with Delhi Daredevils in 2009 and played five seasons for the franchise before moving to Sunrisers Hyderabad in 2014 from where he moved back to Delhi Capitals ahead of IPL 2022. CSK vs DC Preview: Likely Playing XIs, Key Battles, Head to Head and Other Things You Need To Know About TATA IPL 2022 Match 55.

"I had once vented my anger at Warner because of the way he was travelling with the Delhi team. He had just come in (2009), believing more in parties, less in practice and matches. I suppose in the first year, he was also involved in a fight with some players, so we sent him home for the last two matches," Sehwag told Cricbuzz. "It happens sometimes that in order to teach someone a lesson you have to bench him. Because he was a new player, it was important to tell him that you are not important for the team; there are other players who can play in your place and win matches for the side. And it happened. We benched him and we won as well," added Sehwag.

Sehwag, however, said that it was wrong on the part of Sunrisers Hyderabad to first remove Warner as captain and then bench him completely during the 2021 season. Warner was with the franchise for eight years and scored a whopping 4014 runs in 95 matches at an average of 49.46 and a healthy strike of 142.59. The Australian scored 40 half centuries and two centuries during his stint with SRH and guided them to their maiden IPL title in 2016. "If you keep a player, who has been consistently giving performances, out then that is wrong. Then you are spoiling the winning combination of the team. It sends out a wrong message. What was David Warner's fault when he said that he didn't drop a player... the selectors dropped him, team management dropped him. Warner didn't say anything wrong," said Sehwag. How To Watch PBKS vs RR Live Streaming Online in India, IPL 2022? Get Free Live Telecast of Punjab Kings vs Rajasthan Royals, TATA Indian Premier League15 Cricket Match Score Updates on TV.

"Tomorrow if the India captain says that such and such player had not been dropped by him but by the selectors, it means he is telling the truth... will he be removed as captain, will you remove him from the team completely? That will be a wrong decision. Whatever happened was wrong," added the cricketer-turned-commentator. "SRH's loss is Delhi Capitals' gain," said Sehwag. "(New SRH skipper) Kane Williamson is not doing any better. He has the same performance this year as Warner had last season but the New Zealander is still the captain... almost identical numbers, but he is still there.

"I suppose his (Warner's) off-field remarks did not go down well with the (SRH) team management. They (SRH management) would have thought that the impression going out was that the captain is given less importance in the side and calls are taken by the management," added Sehwag about the controversy last year. Warner was first removed as skipper by the SRH management in 2021 and then, during the second leg of the IPL in the UAE, he was not included in the playing XI for several games.

(The above story first appeared on LatestLY on May 07, 2022 04:32 PM IST. For more news and updates on politics, world, sports, entertainment and lifestyle, log on to our website latestly.com).