Delhi Capitals defeated Kolkata Knight Riders by seven wickets in match 25 of the Indian Premier League 2021 at the Narendra Modi Cricket Stadium on Thursday. With this win, Rishabh Pant’s team have pulled clear of the chasing pack in the playoff race, while Kolkata Knight Riders after a fifth defeat in seven games, find themselves in a dire position. 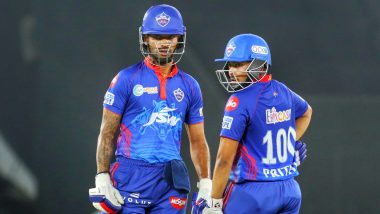 After being put to bat first, Kolkata Knight Riders once again had poor powerplay, making a slow start and losing Nitish Rana for cheap. Following a quick rebuild, KKR once again faltered losing four wickets for just 13 runs. However, a late cameo from power hitter Andre Russell saw them post a decent score on the board. IPL 2021 Points Table Updated: DC Advance to 2nd Position with Seven-Wicket Triumph over KKR.

Chasing the score, Delhi Capitals made a sensational start, scoring at the rate of knots in the powerplay with the opening duo stitching up a 132-run partnership. This put DC in a great position and despite losing wickets in clusters towards the end, they managed to get over the line with ease. Meanwhile, here are some stats from the DC vs KKR clash.

Delhi Capitals are in a great position to make it to their third consecutive playoffs and will look to take a huge step towards it when they face another struggling side in Punjab Kings next. Meanwhile, Kolkata Knight Riders are hoping to get some momentum under their belt but face a daunting task in Royal Challengers Bangalore.

(The above story first appeared on LatestLY on Apr 29, 2021 11:30 PM IST. For more news and updates on politics, world, sports, entertainment and lifestyle, log on to our website latestly.com).