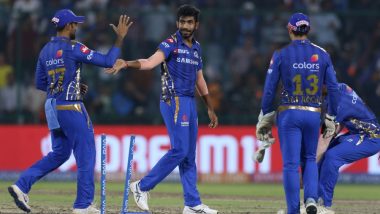 Mumbai Indians defeated Delhi Capitals by 40 runs in the Indian Premier League 2019 (IPL 2019) match 34 at the Feroz Shah Kotla. Chasing a target of 169 runs, Delhi Capitals were restricted to 128 for non in their allotted 20 overs. Following the defeat, Delhi Capitals drop to third place on the IPL 2019 points table while Mumbai Indians move to second place. IPL 2019 Points Table Updated: MI Moves to Second Spot on the Indian Premier League 12 Team Standings With Win Over DC.

Despite Prithvi Shaw and Shikhar Dhawan starting on a positive note and adding 49 runs for the first wicket, Delhi Capitals lost their way in the middle. Spinner Rahul Chahar was the pick of the bowlers as he scalped three wickets. Chahar’s victims included DC openers and another important one in Shreyas Iyer. Amit Mishra Becomes First Indian Bowler to Take 150 Wickets in IPL.

# For the first time in IPL's history first five out of six batsmen were bowled, happened during Delhi Capitals' innings.

# This was Mumbai Indians' 12th win over Delhi. Both have now won 12 mathes against each other.

Earlier batting first Quinton de Kock and Rohit Sharma provided Mumbai Indians with the a good start and added 57 runs for the first wicket. However, in the middle, Mumbai lost their way and were reduced to 104 for four at one stage.

Towards the end Hardik Pandya and Krunal Pandya added 54 runs for the fifth wicket to take Mumbai to a competitive total. While Hardik scored 32 off just 15 balls, Krunal finished unbeaten on 37 off 26 balls.

(The above story first appeared on LatestLY on Apr 19, 2019 12:30 AM IST. For more news and updates on politics, world, sports, entertainment and lifestyle, log on to our website latestly.com).