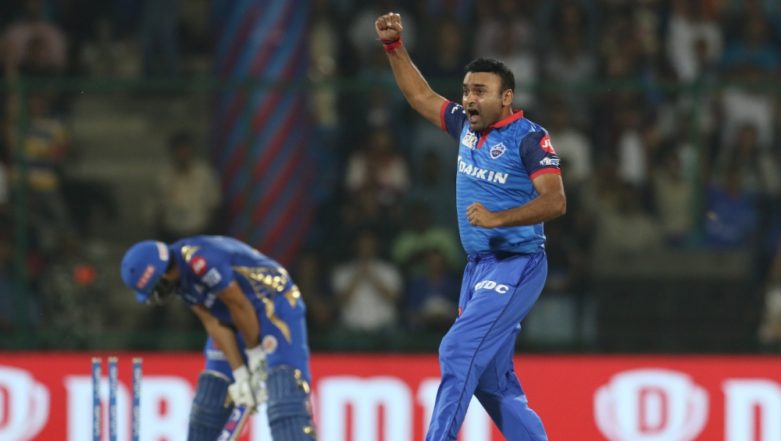 Delhi Capitals leg-spinner Amit Mishra complete his 150 wickets in the Indian Premier League (IPL) and with it, he becomes the first Indian bowler to achieve the feat. Playing in his 140th match, Mishra reached the landmark as Mumbai Indians’ captain Rohit Sharma was his victim. Interestingly, this was the sixth time Mishra dismissed Rohit in the IPL and this is the most he has dismissed any batsman. Delhi Capitals vs Mumbai Indians Live Cricket Score.

Mishra is second on the list of most wickets in IPL, topped by Mumbai Indians’ fast-bowler Lasith Malinga. The 36-year-old spinner has previously represented now-discarded Deccan Chargers and Sunrisers Hyderabad in the IPL. At the start of the season, Mishra was four wickets away from the 150-mark and it took him four games to achieve the milestone. Mishra, initially, was not picked by Capitals in their playing XI this season.

The spinner had the chance of creating the record last game against Sunrisers Hyderabad, but he went wicket-less in the match. Mishra has scalped three four-wicket and one five-wicket hauls thus far in his IPL career with 5/17 as his career best. DC vs MI, IPL 2019 Live Cricket Streaming: Watch Free Telecast of Delhi Capitals vs Mumbai Indians on Star Sports and Hotstar Online.

Indian Bowlers With Most Wickets in IPL

Mishra has been playing the IPL since its inception and in the first season, he picked 11 wickets from just six matches. In 2013 edition of IPL, the leggie picked 21 wickets from 17 matches and remains his best performance in the league. 19 wickets from 14 matches in 2011 is his second best season as far as wickets tally is concerned.