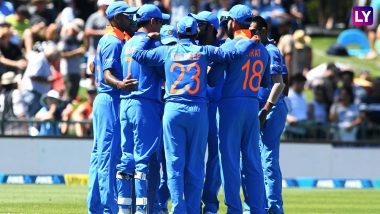 Cricket is certainly one of the most popular sports around the world as billions of people are praying for a certain outcome of the match. Owing to the massive admiration of the game, several prominent players get a lot of love and blessings from the fans. However, on the other side of the coin, the same players are subjected to online trolling after not being able to live up to the expectation. Social media gets filled with memes and also some derogatory posts following the dismal performance of a player or a team. Recently, however, the netizens took a pledge that no cricketers will further face the heat on social media as #RespectAllCricketersOnTwitter became one of the top trends on Twitter.  Twitterati Not Impressed With Yuvraj Singh's Comment on Yuzvendra Chahal During Instagram Live With Rohit Sharma.

Winning and losing is a part and parcel of the game. Hence, expecting favourable results every time is certainly not fair. Also, the impact of the fans and crowd also has a great impact on many players. In fact, many players like Glenn Maxwell and Nic Maddinson took a break from the game owing to their mental health. Nevertheless, several fans took the onus upon them and urged people to respect all the cricketers on social media. Meanwhile, have a look at how they reacted.

A Must Watch Video For MS Dhoni Fans!!

Must watch video for all MS Dhoni fans and most importantly for the haters!

We will never find a cricketer like him... RESPECT HIM! #Dhoni #RespectAllCricketersOnTwitter@msdhoni pic.twitter.com/mMUXmPZ7Tv

They are not other other team.

A team India 💪 when all team is there. I accept every one has their own favorite. But don't disrespect other players. Stop trolling spread positivity. Let's be the change .

India is called the land of great sportsmen. Cricket is not just a word but an emotion in India.

We need to respect all cricketers for their hard work and dedication.#Respectallcricketersontwitter

They are Not Playing For their Sake,

They are Playing For Our Country

Respect Each and Everyone Cricketer who Plays For India 👍#RespectAllCricketersOnTwitter

Believe that cricket itself a separate religion in our country. All of them truly deserve that damn respect because they are wearing the spirits of the country.....🇮🇳🇮🇳🇮🇳 #HappyBirthdayAjinkyaRahane @ajinkyarahane88 @BCCI

Say No To Trolling!!

Cricketers work hard and come from a very humble and poor background .They r all self made. And we often see people here crossing lines in trolling. #RespectAllCricketersOnTwitter

Meanwhile, after more than three months of international cricket, cricket boards all around the world are planning to resume the game at the highest level. In fact, West Indies have already announced their Test squad which will tour England in July. If everything goes as per plan, the first Test between the two sides will mark the return of international cricket.

(The above story first appeared on LatestLY on Jun 06, 2020 03:36 PM IST. For more news and updates on politics, world, sports, entertainment and lifestyle, log on to our website latestly.com).