In a video uploaded by Cricbuzz on Twitter, Harsha Bhogle picked the best all-round performance of the season so far and unsurprisingly, he went with Ravindra Jadeja’s heroics against the Royal Challengers Bangalore (RCB) at the Wankhede Stadium, Mumbai. The CSK all-rounder unleashed his best in that clash and it wouldn’t be wrong to say that RCB were undone by a single man. 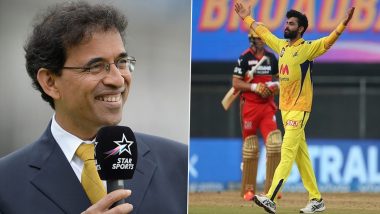 Ravindra Jadeja was on a roll in the VIVO Indian Premier League (IPL) 2021, which got abruptly postponed indefinitely due to the COVID-19 crisis. At the time of the suspension, Chennai Super Kings (CSK) were second in the team standings with five victories in seven games and a lot of credit must go to Jadeja. The southpaw played several fiery cameos alongside bowling economical spells and taking wickets regularly. As if this wasn’t enough, Jadeja also tormented oppositions with his jaw-dropping catches and spectacular run-outs. His all-round brilliance earned massive praises from veteran Indian commentator Harsha Bhogle who called the CSK star ‘Sir Jadeja.’ Ravindra Jadeja Playing Well Opens Many Options for Team India, Says Virat Kohli.

In a video uploaded by Cricbuzz on Twitter, Bhogle picked the best all-round performance of the season so far and unsurprisingly, he went with Jadeja’s heroics against the Royal Challengers Bangalore (RCB) at the Wankhede Stadium, Mumbai. The CSK all-rounder unleashed his best in that clash and it wouldn’t be wrong to say that RCB were undone by a single man. Batting first, Jadeja, coming at number five, smashed an unbeaten 62 off 28 deliveries. The southpaw even smashed the Purple Cap holder Harshal Patel for a whopping 37 runs in the final over.

Adding salt to RCB’s woes, the left-arm spinner then took three wickets which include dismissals of Glenn Maxwell and AB de Villiers. Furthermore, he ran Daniel Christian out with a fiery throw. Now, is there anything more a player can do on a cricket field? Like several fans and experts, Bhogle was also in awe of Jadeja’s brilliance and he heaped praises on the 32-year-old.

“The all-round performance of the season; there can only be one, and that is Sir Jadeja himself. He hits 37 off the last over, he then picks 3/13 including the wickets of Maxwell and AB, has a direct hit. One person doing that (is) inconceivable. If there is a better performance than this in this season, I want to be there, bang in the middle watching it happen,” the veteran commentator said on Cricbuzz.

Jadeja was overwhelmed with Bhogle’s praises as he thanked the commentator. However, the all-rounder also asked the commentator to not call him ‘Sir.’ “Thanks a lot @bhogleharsha but I will be more happy if you call me Ravindra Jadeja” he tweeted.

Meanwhile, BCCI is planning to conduct the rest of the tournament in September, just before the T20 World Cup. However, if the COVID-19 virus continues to wreak havoc in the nation at that time, the gala tournament might be shifted to UAE, just like the 2020 season.

(The above story first appeared on LatestLY on May 05, 2021 07:59 PM IST. For more news and updates on politics, world, sports, entertainment and lifestyle, log on to our website latestly.com).