IND vs AUS 2nd T20I 2020 Dream11 Team: Yuzvendra Chahal, Moises Henriques and Other Key Players You Must Pick in Your Fantasy Playing XI

India (IND) will lock horns with Australia (AUS) in 2nd T20I of the three-match series. The game will be held at Sydney Cricket Ground in Sydney on December 6, 2020. The Indian team led by Virat Kohli defeated Australia in the previous T20I by 11 runs as they failed to chase down the target of 162 runs. 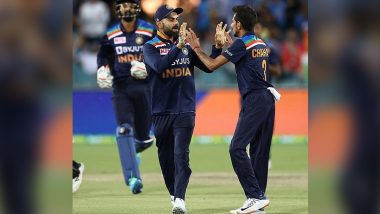 India (IND) will lock horns with Australia (AUS) in 2nd T20I of the three-match series. The game will be held at Sydney Cricket Ground in Sydney on December 6, 2020. The Indian team led by Virat Kohli defeated Australia in the previous T20I by 11 runs as they failed to chase down the target of 162 runs. The upcoming match is a must-win game for Aaron Finch and his men as India leads the series by 1-0. Meanwhile, you have arrived at the right platform, if you are looking for IND vs AUS 2nd T20I 2020 Dream11 team key players which include star performers like Yuzvendra Chahal and Moises Henriques. IND vs AUS 2nd T20I 2020 Dream11 Team Selection: Recommended Players As Captain and Vice-Captain, Probable Lineup to Pick Your Fantasy XI.

Australia after winning the toss elected to bowl in which they managed to keep the target to 162 runs as India made 161/7 in 20 overs. KL Rahul scored a handy half-century in that game, while Ravindra Jadeja made unbeaten 44 runs from 23 balls which helped India cross the total of 160. In reply, Australia managed to make 150/7 in which Yuzvendra Chahal, T Natarajan and Deepak Chahar bowled well to help India win by 11 runs. Now let us look at key players for IND vs AUS 2nd T20I Dream11 team. IND vs AUS Dream11 Team Prediction: Tips to Pick Best Fantasy Playing XI for India vs Australia 2nd T20I 2020.

Yuzvendra Chahal came in as a substitute for Ravindra Jadeja after the left-handed all-rounder suffered a concussion while batting. Chahal utilised the opportunity well as he put Australia in the backfoot by picking up important wickets of Aaron Finch and Steve Smith. Chahal with his impressive figure of 3/25 is a must pick for your fantasy team.

KL Rahul was the highest scorer in IPL 2020 where he was awarded the orange cap at the end of the season. The wicket-keeper batsman continued his form in the previous T20I by scoring 51 runs from 40 balls. Rahul can be chosen as captain of your fantasy team as he takes catches behind stump and score runs consistently. India vs Australia 2nd T20I 2020 Preview: Likely Playing XIs, Key Battles, Head to Head and Other Things You Need to Know About IND vs AUS in Sydney.

Moises Henriques is a great T20I batting all-rounder and he played some fine cricket in the previous T20I match. Henriques had a figure of 3/22 in 4 overs and also made 30 runs from 20 balls. Without a doubt, Moises Henriques should be part of your fantasy team.

The Australian skipper Aaron Finch can take the game away from the opponent at any given time. Finch has made 2149 runs from 65 T20Is with a strike rate of 154.27. In the previous game, he made 35 runs from 26 balls. Aaron Finch should be one of your batsmen in IND vs AUS 2nd T20I 2020 Dream11 team.

T Natarajan showed his brilliant bowling skill in IND vs AUS 3rd ODI 2020 where he bagged two wickets. In the previous T20I, he provided a strong base to pace attack by picking up wickets of D Arcy Short, Glenn Maxwell and Mitchell Starc. Natarajan ended with a figure of 3/30 in 4 overs and it would be wise to pick him as a bowler for your IND vs AUS 2nd T20I fantasy team.

(The above story first appeared on LatestLY on Dec 05, 2020 08:56 PM IST. For more news and updates on politics, world, sports, entertainment and lifestyle, log on to our website latestly.com).