IND vs AUS 3rd ODI 2020 Dream11 Team: Steve Smith, KL Rahul and Other Key Players You Must Pick in Your Fantasy Playing XI

Australia will eye a clean sweep as they take on India in the third and final ODI of the series. The match takes place at the Manuka Oval in Canberra on December 2 (Wednesday). With the home team already sealing the series by winning the first two games, the final match is a mere dead rubber. 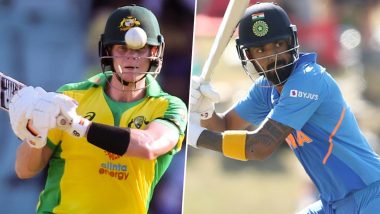 Australia will eye a clean sweep as they take on India in the third and final ODI of the series. The match takes place at the Manuka Oval in Canberra on December 2 (Wednesday). With the home team already sealing the series by winning the first two games, the final match is a mere dead rubber, but the Aussies have a golden chance to whitewash the mighty Indian side. On the other hand, Virat Kohli’s men have nothing but pride to play for, and they must be eyeing to earn a consolation victory in Canberra. AUS vs IND Dream11 Team Prediction: Tips to Pick Best Fantasy Playing XI for Australia vs India 3rd ODI 2020.

The match gives another chance to Dream11 fans to win big rewards. Dream11 fantasy gaming platform is quite popular among cricket fans who select their teams to win some cash. So, find out our tips and suggestions to pick the best players for your AUS vs IND 3rd ODI 2020 Dream11 fantasy playing XI. India vs Australia Preview: 7 Things You Need to Know About IND vs AUS 3rd ODI 2020 in Canberra.

The Australian dasher is at the peak of his prowess which makes him an automatic choice in your fantasy team. He has scored centuries in the first two games and that too at a staggering strike rate. With the Canberra track known to favour the batsmen, one can expect another stellar show from the former Australian captain.

Another Aussie star who came well in the first two ODIs is Glenn Maxwell. After a poor Indian Premier League (IPL) season for Kings XI Punjab, the dasher proved his mettle once again by making a mockery of the Indian bowlers in the first two ODIs. Maxwell can also chip in with few handy overs which makes him a potent pick in your Dream11 team.

The on-going ODI series has been nothing short of nightmares for the bowlers. One of the very few bowlers who have made a mark is Adam Zampa. The star leg-spinner has been brilliant in the middle overs, and his knack of taking regular wickets has dented India further. Hence, he must be inducted in your fantasy side.

The Indian skipper scored an impressive 89 in his previous outing and will like to put up a similar or even better show. He looked in fine touch in second ODI as he smashed Pat Cummins and Mitchell Starc for fun. With Kohli having the knack of performing under the pump, he’s indeed a must pick in your team.

Continuing his stellar IPL form, Rahul had an impressive outing in the second game. He scored a quick-fire 75 and threatened Australia to take the game away from the grasp. With Rahul also serving as a wicket-keeper, his dismissals behind the stumps will fetch even more points for you.

Notably, India was whitewashed in their last ODI series against Australia and will not want to face that scare again. They indeed will face a less difficult challenge with David Warner and Pat Cummins not participating in the remaining limited-overs game. However, bouncing back against the in-form Aussies will take some beating.

(The above story first appeared on LatestLY on Dec 01, 2020 03:57 PM IST. For more news and updates on politics, world, sports, entertainment and lifestyle, log on to our website latestly.com).