IND vs ENG 2021: Virat Kohli and James Anderson’s Rivalry To Get a Break As England Bowler May Rest To Return for the Fifth Test in Manchester

Considering England have a long summer during the Ashes series Down Under and with Jofra Archer under injury cloud, England may rest Anderson for one of the next two Tests as part of workload management. 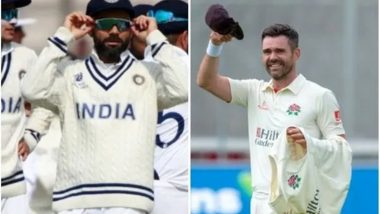 London, Aug 30: The mouth-watering battle between India skipper Virat Kohli and James Anderson may not take place in the fourth Test at The Oval as the veteran England pace bowler could be rested and return only for the fifth match in Manchester. The quick turnaround in the last three Test matches - to be played within three weeks, is forcing both the teams to rotate bowlers. While India have already made it clear, the English team could also go that way."What I don't want to do is break them. We've got a lot of cricket in front of us. The Tests are coming thick and fast now. Back-to-back, it is difficult," said England head coach Chris Silverwood to the media while pointing out the workload of his two new-ball bowlers, Anderson and Ollie Robinson.  India vs England 3rd Test 2021 Day 4 Highlights: ENG Win By An Innings And 76 Runs, Level Series 1-1.

At the age of 39, Anderson has already bowled more overs in the first three Tests than any of the Indian seamers have bowled. He has bowled 116.3 which is just two balls less than Ollie Robinson (116.5), who has bowled the most in the series. "These guys are giving everything, every day when we are out on the field and we have got to make sure we are looking after them. But I won't be making any decisions or judgments right now," he added. The second Test match begins on September 2.

Anderson though had made it clear earlier that he wants to play every Test match in the series. Even though he had niggle in the lead-up to the second Test at Lord's, he turned up to perform. He was unplayable in the first innings of the third Test at Headingley. But considering England have a long summer during the Ashes series Down Under and with Jofra Archer under an injury cloud, England may rest Anderson for one of the next two Tests as part of workload management. 'This Isn’t Your Backyard' Virat Kohli to James Anderson As They Engage in War of Words at Lord’s on Day 4 of Second Test (Watch Video).

With the last Test to be played at Anderson's home ground at Old Trafford in Manchester from September 10, it is likely that the England team management will play him there rather than at The Oval. Silverwood, though, admitted it will be hard to convince Anderson to miss the fourth Test. England also face a problem as their left-arm pace bowler Sam Curran is not performing well and is leaking runs whenever he has been brought on to bowl with the old ball. He may be replaced by Chris Woakes, who is fit again and has been added to the England squad.

(The above story first appeared on LatestLY on Aug 30, 2021 07:41 PM IST. For more news and updates on politics, world, sports, entertainment and lifestyle, log on to our website latestly.com).