India brushed off their disappointment of an early exit at the T20 World Cup 2021 with an emphatic 3-0 series sweep over New Zealand. The Rohit Sharma-Rahul Dravid era began on a high as India started their preparations for the T20 World Cup next year in great fashion. 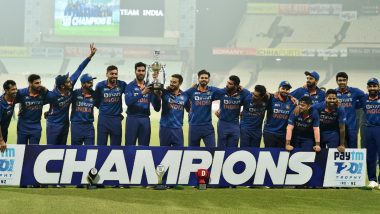 India completed a clinical sweep over New Zealand as they won the third and final T20I by 73 runs at the Eden Gardens in Kolkata on Sunday, November 21. This was thus a pretty successful start to life as India's full-time T20I captain  for Rohit Sharma and new head coach Rahul Dravid, as the Men in Blue sent a strong statement that they have already begun preparations for the next T20 World Cup in emphatic fashion. India wanted to challenge themselves by doing something different and so captain Rohit Sharma chose to bat first after winning the toss. And the decision proved to be a great one with him and Ishan Kishan taking apart the New Zealand bowlers in the first six overs, scoring 69 runs without losing any wicket. India vs New Zealand Highlights 3rd T20I 2021: IND Defeat NZ To Complete Whitewash

But New Zealand stand-in captain Mitchell Santnter broke the rampaging partnership with the wickets of Ishan Kishan (29) and Suryakumar Yadav (0). Rohit in particular, looked in his elements as he does on most occasions while batting in Kolkata, scoring a quickfire 56 runs off 31 balls.

The middle-order stumbled but two partnerships somewhat helped India not lose control of their innings in the middle-overs with Shreyas Iyer getting involved in both. First, it was a 20-run stand between him and skipper Rohit Sharma and then, a 36-run one with Venkatesh Iyer. But the late impetus to the innings was provided by Harshal Patel (18 off 11) and Deepak Chahar (21 off 8) which helped India finish on a high at 184/7. Harshal Patel also scripted an unwanted record for himself, after he got himself dismissed hit-wicket while attempting a cut shot.

Chasing 185 to win and salvage some pride from what has been a disappointing series, New Zealand started off well, scoring 21 runs off two overs. Even when Daryl Mitchell failed to make an impact, Martin Guptill took the attack to the Indian bowlers, scoring 51 off just 36 balls. He was the lone warrior in a poor batting show from the T20 World Cup 2021 finalists as no other Kiwi batsmen could find their rhythm. The Indians were decent on the field and they never let their intensity down, strangling New Zealand and picking up wickets consistently to ensure that they did not make anything out of their run-chase. Axar Patel (3/9) was the wrecker-in-chief, taking three important wickets (Daryl Mitchell, Mark Chapman and Glenn Phillips) upfront to peg New Zealand back. Post Guptill's dismissal, the Kiwis hardly got going. Eventually, it was India with the last laugh with a win by 73 runs in 17.2 overs. Harshal Patel got two wickets while Yuzvendra Chahal, Deepak Chahar and Venkatesh Iyer got one each.

Axar Patel was named Man of the Match for his excellent bowling and skipper Rohit Sharma was awarded Man of the Series for scoring 159 runs in the three matches, with scores of 48, 55 and 56.

Take a look at some of the stat highlights of the game:

#This was India's first series T20I series whitewash at home after three years. The last time they did so was against West Indies in 2018.

#Harshal Patel was the second Indian player to be dismissed hit-wicket in T20Is after KL Rahul.

#Rohit Sharma scored his 30th fifty-plus score in T20Is, surpassing Virat Kohli, who has 29 to his name.

#Rohit Sharma became the second Indian T20I captain to win the toss in all the matches of a bilateral series after Virat Kohli, who did it against the West Indies in 2019.

#This victory was India's eighth consecutive win in a bilateral T20I against New Zealand.

#India also became the first team to whitewash New Zealand in bilateral T20I series both at home and away.

With the T20Is done and dusted, India would focus their attention to the two-match Test series which starts from November 25. Ajinkya Rahane would lead India in the first match in Kanpur with skipper Virat Kohli joining the team in the second match, which would be played in Mumbai.

(The above story first appeared on LatestLY on Nov 21, 2021 11:28 PM IST. For more news and updates on politics, world, sports, entertainment and lifestyle, log on to our website latestly.com).