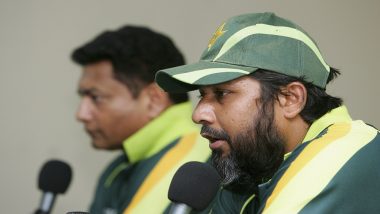 Lahore, June 26: Former Pakistan captain Inzamam-ul-Haq slammed the Pakistan Cricket Board and its medical staff for their attitude towards looking after the players' health. Nine of the 29-man squad that Pakistan have chosen for the tour of England in late July have tested positive for coronavirus along with one member of the support staff.

"The players who have tested positive would have thought that PCB is not supporting them at this difficult time," said Inzamam on his YouTube channel. "My sources have told me that the PCB's medical staff did not attend calls of these players during the past couple of days, which is a really bad attitude." Inzamam-Ul-Haq Points Out Difference Between India and Pakistan Teams During Early 90s, Says ‘Our Batsmen Scored for the Team’ While ‘Indian Players’ Hundreds Were for Themselves’.

"I would request the PCB to properly look after these players because if you don't then incidents, like Hafeez getting himself tested privately, will happen," he added. The 50-year-old also said that the board should let players self-isolate at the National Cricket Academy in Lahore instead of asking them to do so at their homes.

"PCB should have kept these players [who tested positive] at the NCA, because there is enough space there, rather than telling them to self-isolate at their homes. They are our players and we need to look after them so that they can fully recover," he said.

(The above story first appeared on LatestLY on Jun 26, 2020 08:54 PM IST. For more news and updates on politics, world, sports, entertainment and lifestyle, log on to our website latestly.com).