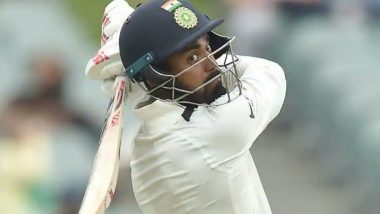 Bengaluru, August 10: With the Indian Premier League (IPL) set to begin from September 19, India batsman K.L. Rahul on Monday posted short video snippets of his batting on social media. Rahul, who will lead Kings XI Punjab in the 13th edition of the IPL, was seen playing defensive shots in the video posted on Instagram. "Music to my ears," the dashing batsman captioned the post.

Rahul is set to become the fifth Indian and 12th player overall to lead Kings XI Punjab in the IPL. The BCCI will be organising the IPL at three venues -- Dubai, Abu Dhabi and Sharjah -- from September 19 to November 10, after it was postponed from March due to the Covid-19 pandemic. Rahul recently suggested that his teammate Hardik Pandya's newborn son should become a fast bowling all-rounder like his father. IPL 2020: Anil Kumble’s Experience Should Work Well With KL Rahul, Says KXIP Co-Owner Ness Wadia.

Music to my ears 🏏 @kxipofficial

Hardik's brother and fellow all-rounder Krunal Pandya posted a boomerang of him holding the baby on his Instagram handle. Rahul wrote in the comments: "Please tell him to become a fast bowling all rounder (folded hands)".

Hardik and Natasa Stankovic, who had got engaged earlier this year, were blessed with a baby boy in late July. Hardik announced the news in a Twitter post which read: "We are blessed with our baby boy." It was posted with an image of the baby's hand. The delivery happened in Vadodara.

(The above story first appeared on LatestLY on Aug 10, 2020 10:01 PM IST. For more news and updates on politics, world, sports, entertainment and lifestyle, log on to our website latestly.com).