MI vs KKR, IPL 2022: Ishan Kishan Admits Losing Focus in the First Six Overs While Trying To Finish the Game

Mumbai Indians wicketkeeper-opener Ishan Kishan admitted that he had lost his focus from giving good starts in the first six overs to be a finisher for his side in IPL 2022. 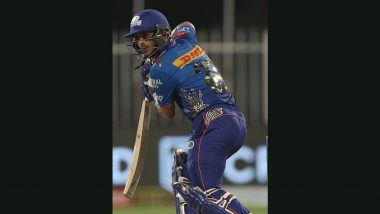 Mumbai, May 11 : Mumbai Indians wicketkeeper-opener Ishan Kishan admitted that he had lost his focus from giving good starts in the first six overs to be a finisher for his side in IPL 2022. Kishan had started the tournament with a bang, with scores of 81 not out and 54 in first two matches. But soon he fell into a rough patch, as seen from his scores of 14, 23, 3, 13, 0 and 8. With Mumbai now out of contention for the playoffs, it seems that Kishan is trying to get back to the style which had fetched him success in the past, chipping in with scores of 51, 45 and 26 in the last three matches. IPL 2022: Happy That Efforts Put in the Process of Preparation Are Paying Off, Says Shikhar Dhawan.

"What worked well for me was, initially when I started the tournament, I wasn't over-thinking, I was just going and batting, like I used to do. My focus was on giving a good start to the team. But I think later on, somewhere I was trying to finish the game maybe I lost my focus in the first six overs," said Kishan in the pre-match virtual press conference ahead of the match against Chennai Super Kings on Thursday. Speaking to captain Rohit Sharma and head coach Mahela Jayawardene encouraged Kishan to get back to his free-flowing style of play. "I had a chat with the coach and captain also, and they just said, 'If you can give us a good start, it will be helpful for the team, so you don't have to think about finishing the game. If you are set there in the middle, you will anyway do that.' So right now my focus is just on giving good starts, and making sure that I don't get out easily. And if I'm the set batsman in the middle, I'm making sure that I have to be someone who is there to finish the game."

Many have linked Kishan's downturn in form to the 'price-tag pressure', pointing towards the Rs 15.25 crores pay check at the IPL Mega Auction in February this year. Kishan acknowledged that the weight of the price tag existed in his mind initially but explained that he was able to shrug it off with some words of advice from Rohit Sharma, Virat Kohli and Hardik Pandya. "Price tag pressure remains for a certain time and lasts for one or two days after the auction is done. At the level you're playing and having played for a while, you know what is important. Do I keep that pressure on the mind or do I focus on how I can win matches for the team? The price tag pressure may be there for a while but if you have good seniors around you, who you can talk to there are so many senior players to talk to." IPL 2022: Hardik Pandya's Captaincy Garners Praise as He Guides GT to Playoffs.

"There's Rohit bhai, then Virat bhai, Hardik bhai, everyone told me the same thing. Don't think too much about the price tag because this is not something I have asked for. It happened because someone had belief in me. Instead of thinking about that (price tag), think of cricket and be in your zone. That is important. It's possible they would've also faced such a situation before. How have they handled it then? These are things I've spoken about." "So now I feel very light, and don't even think about the price tag. It is secondary. Whether you've been sold for 1 crore, base price or 15 crores - what matters is how you make the team win. Or if you're not in form, how you're helping others bring out their best," concluded Kishan.

(The above story first appeared on LatestLY on May 11, 2022 06:00 PM IST. For more news and updates on politics, world, sports, entertainment and lifestyle, log on to our website latestly.com).