Irfan Pathan Disgusted As One Disgruntled Netizen Calls Him the ‘Next Hafiz Saeed’! (View Post) 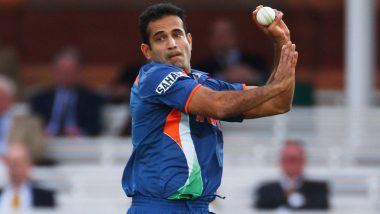 Former Indian all-rounder Irfan Pathan was devastated after a Twitter user compared with him with Pakistan terrorist Hafiz Saeed. The southpaw took to his official Twitter account and shared a screenshot of a tweet made by a netizen who claims that Pathan is not hiding his ambition of becoming the ‘next Hafiz Saeed.’ In a recent interaction, the 2007 T20 World Cup-winner said that former India coach Greg Chappell shouldn’t be blamed to destroy his career. His statement bagged a lot of eyeballs as many other Indian cricket stars like Sourav Ganguly and Harbhajan Singh have criticized the Australian on several occasions for ‘disrupting’ the team. Sachin Tendulkar Not Greg Chappell Advised Rahul Dravid to Promote Irfan Pathan As Number Three Batsman.

However, Pathan came in defence of Chappell and said that it’s very easy to blame him as he’s not an Indian. Reacting to the news of Pathan’s statement, a twitter user wrote: “@IrfanPathan is not hiding his ambitions to become the next Hafiz Saeed at all..this shit is disgusting.” Saeed is a Pakistani terrorist who was behind the 2008 Mumbai Attacks where numerous civilians lost their lives. Pathan was very disappointed when he came across the user’s remarks and he bashed the user. “This is the mentality of certain ppl. Where have we reached ? #shame #disgusted,” wrote Pathan while sharing the screenshot of the remarks.

This is the mentality of certain ppl. Where have we reached ? #shame #disgusted pic.twitter.com/nlLh9vTwS6

Talking about Pathan’s statement about Chappell, rumours were that Chappell promoted Pathan at number three following with the all-rounder’s performance was dipped. However, Pathan made it clear that it was Sachin Tendulkar’s idea to promote him in the batting order.

“I had said this after I had announced my retirement as well. Those who talk about Greg Chappell spoiling my career, by sending me as an allrounder at No.3 and all these things actually, it was Sachin paaji’s idea. He advised Rahul Dravid to send me at No.3. He said ‘he (Irfan) has the power to hit sixes, can take on the new ball and can play the fast bowlers well too,” Pathan told TV presenter Raunak Kapoor on his channel Beyond The Field.

(The above story first appeared on LatestLY on Jul 02, 2020 05:16 PM IST. For more news and updates on politics, world, sports, entertainment and lifestyle, log on to our website latestly.com).