Jasprit Bumrah Pulls Out of Fourth Test Against England, Pacer Unavailable Due to Personal Reasons 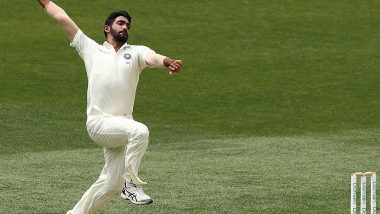 Jasprit Bumrah has pulled out from the fourth Test against England due to personal reasons. No replacements have been made in place for the pacer and the squad remains the same. The fourth Test against England will begin on March 4, 2021. The four-match series currently stands on 2-1 in favour of India. It was Bumrah who had made the request to pull out from India’s squad. Talking about his performance in the third Test, he could not get a single wicket. Michael Vaughan Calls ICC ‘Toothless’ For Allowing India to Create Pitches Like Motera.

“Jasprit Bumrah made a request to BCCI to be released from India’s squad ahead of the fourth Test owing to personal reasons. Accordingly, the fast bowler has been released and he will not be available for selection for the fourth Test,” read the release by the BCCI.  Ishant Sharma, Mohammed Siraj and Umesh Yadav are the pacers who are already in the squad.

Jasprit Bumrah made a request to BCCI to be released from India’s squad ahead of the fourth Test owing to personal reasons.

Here is the squad for the 4th match

(The above story first appeared on LatestLY on Feb 27, 2021 01:35 PM IST. For more news and updates on politics, world, sports, entertainment and lifestyle, log on to our website latestly.com).