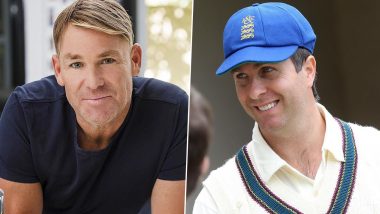 Former England captain Michael Vaughan and Shane Warner were among those left perplexed after England delayed their declaration on day 4 of the first IND vs ENG Test match in Sydney. Fans and cricket experts were left scratching their heads after England kept on delaying their declaration despite having a big lead and were eventually bowled out for 178 setting India 420 runs to win the Test. England were left with a little over 100 over to bundle India and win the Test. India finished the penultimate day on 39/1 still with nine wickets in hand and 381 runs behind. India vs England 1st Test 2021 Stat Highlights Day 4: Ravi Ashwin, Ishant Sharma Achieve Milestones as Chennai Test Perfectly Poised for Final Day.

Surprised at England’s decision to keep batting despite a healthy lead, former England skipper Michael Vaughan tweeted “Get on with it …” referring to England’s decision to bat long again in the second innings despite a massive lead in the bank. Warne soon joined the conversation and asked Vaughan what were England thinking? Rohit Sharma Trolled Brutally Once Again After His Early Dismissal During IND vs ENG Day 4, 1st Test 2021.

If they Win they will have played it well ... if they draw it will affect them for the rest of the Series ... I still think they will win on this pitch ... 👍👍 https://t.co/MDMvK3XJLh

Michael Vaughan Thinks Joe Root is Being Too Cautious

I think he is being get too cautious and is giving India a good chance of getting out of this Test with a draw .. https://t.co/OYGVe8UToI

“What is going on with your cricket team ? What on Earth are they doing just letting the game drift ? Why aren’t they bowling ? England wouldn’t want to not be able to bowl India out now after batting to long in both innings !!” Warne tweeted quoting an early tweet from Vaughan. The pair then discussed England’s chances of bowling India out and winning the Test heading into the fifth day.

Warne also pointed out Australia had played in a similar manner and went on to lose the Test series against the same opposition just weeks ago. “In Australia India played courageous and brave cricket - was awesome to watch ! Australia played timid and cautious cricket & Australia lost the series. England are playing cautious and timid cricket...........” Warne wrote.

If England Doesn't Win They Will Have Themselves to Blame

If England don’t win this this test match they’ll only have themselves to blame.What on earth is Dom Bess ( and Jo Root)doing 13 of 44 balls when you’re 390 in front.🤷‍♂️

Vaughan and Warne though weren’t the only once confused with England’s decision to delay the declaration. “If England don’t win this this test match they’ll only have themselves to blame.What on earth is Dom Bess ( and Jo Root)doing 13 of 44 balls when you’re 390 in front,” asked the former Aussie batsman. Many others also reacted to England’s shocking strategy with the bat.

England could still win this on this pitch but that doesn't justify this.

The visitors are, however, still favourites to win the Test and need to pick nine more wickets to take the lead in the series. After being bundled for 178 runs in the second innings, England set India a 420-run target. Jack Leach then gave Joe Root’s men the first breakthrough after dismissing Rohit Sharma and restricting India to 39/1 at stumps on the final day of the Test.

(The above story first appeared on LatestLY on Feb 08, 2021 06:09 PM IST. For more news and updates on politics, world, sports, entertainment and lifestyle, log on to our website latestly.com).