New Zealand put up a clinical show against Pakistan and won the first Test by 101 runs. With this, the Kiwis become the top-ranked Test team for the very first time in history. The game, however, was approaching a draw with just four overs remaining. However, Mitchell Santner dismissed Naseem Shah with a stunning one-handed catch to take his side over the line. 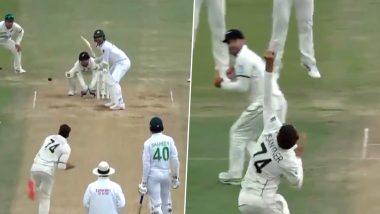 New Zealand put up a clinical show against Pakistan and won the first Test by 101 runs. With this, the Kiwis become the top-ranked Test team for the very first time in history. Although the home team had the command in the majority of the encounter, there was some drama in the end thanks to Fawad Alam's gritty ton. New Zealand needed as many as five wickets in the game's final session with Alam and skipper Mohammad Rizwan well set on the crease. However, the Blackcaps eventually managed to cross the line just few overs before the end of day's play. Wasim Jaffer Hilariously Trolls Pakistan For Losing the First Test Against New Zealand.

Notably, Pakistan lost their first eight wickets against Neil Wagner, Tim Southee, Trent Boult and Kyle Jamieson. However, kiwi skipper Kane Williamson surprisingly handed the ball to left-arm spinner Mitchell Santner to bowl from one end. The move eventually worked with Santner dismissing Mohammad Abbas in the 116th over. However, his efforts seemed to be going in vain as last pair Naseem Shah and Shaheen Afridi survived more than seven overs. With just four overs remaining in day's play, Pakistan were hopeful of getting a draw. However, Santner ended their party with a stunning one-handed catch to dismiss Shah.

It was an on-the-stump delivery from Santner which Shah tried to drive straight with many close-in fielders surrounding him. However, he couldn't place the ball correctly, and Santner took a brilliant one-handed catch under pressure to take his side over the line.

Mitch is going to remember this for a long time. How good was that return catch though? #NZvPAK pic.twitter.com/cOQtPO4BMo

With this, Kane Williamson's men also get a 1-0 lead in the two-match Test series. Despite the loss, however, Pakistan must have got a lot of confidence with their brilliant fight back. Also, their regular skipper Babar Azam is expected to get fit for the second Test, which will boost their morale even more. The second and final Test takes place at the Hagley Oval in Christchurch on January 3.

(The above story first appeared on LatestLY on Dec 30, 2020 12:32 PM IST. For more news and updates on politics, world, sports, entertainment and lifestyle, log on to our website latestly.com).