Mohammad Shami On How He Would Dismiss Virat Kohli: 'Even the Best Have Their Weak Zone, Just Need to Pick It'

It is often said that a bowler is only as good as his captain allows him to be because at the end of the day it is the skipper who has to trust his bowler to deliver. And Shami says the relation between Kohli and him is there for all to see on the field. 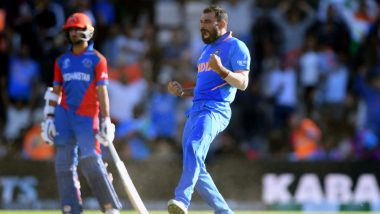 New Delhi, April 17: Team India boasts of a fast-bowling attack that skipper Virat Kohli says he is proud to lead. And the man who has been an integral part of the transformation of a young attack into world beaters is Mohammed Shami. Having started off under former skipper Mahendra Singh Dhoni, Shami is now the leader of the pack under Kohli.

Speaking to IANS, even as the sporting world has come to a standstill due to the coronavirus outbreak, Shami not only throws light on becoming one of the best exponents of the reverse swing, but also talks about the relationship he shares with skipper Kohli. And most importantly, how it is vital for every Indian to stay safe and stay indoors in this fight against the pandemic.

While bowlers tend to get slower as a Test match progresses, Shami is someone who gets better with each passing session and has time and again shown that he can be a match-winner in the second innings for Team India. So what is his area of focus when he has that ball in hand? Mohammed Shami Reveals He Played the ICC Cricket World Cup 2015 With Knee Injury, Says ‘I Couldn’t Walk After the Matches’.

"I try to ensure that my pace doesn't fall below the 140kph mark. But my focus is on the seam and swing. I have always tried to make sure that these two things remain perfect. I can bring pace with my physical strength and you can always work on it by doing strength training. But I have always given priority to swing and seam and never for a minute let them take a backseat," he smiles.

And the reverse swing? Did Shami have it from the word go? Or did it take time to master the art? The pacer says that it is something that has come to him with time and after a lot of training.

"As you keep playing, you learn a lot of things. It is all about following one process after the other. So, when you have learnt one trick and mastered it, you then move to the next one and work on that. In the beginning, I didn't have much idea about reverse swing.

"But slowly I came to understand what the process of reverse swing is all about and how it can be an integral part of a pace bowler's armoury. Then I started working on it because you are not born with it. It wasn't like God sent me with the art. I had to work hard and to be honest, you have to work hard for everything that you wish to achieve in life," he explained.

It is often said that a bowler is only as good as his captain allows him to be because at the end of the day it is the skipper who has to trust his bowler to deliver. And Shami says the relation between Kohli and him is there for all to see on the field.

"Do I need to say this? I think the results bear testimony to the fact that Virat backs us to the core. He has always given us that freedom to do what we feel confident about. Also, it is very important at the international level to have a captain who knows your strengths and weaknesses and also backs you. This in turn helps you raise your game.

"Also, Virat has a lot of trust in our abilities and he gets the result because as a bowler, all you need is for the captain to back you and believe in you and your vision," he insists.

So how would Shami the pacer dismiss Kohli the batsman?

"There are a lot of things that come with playing and spending quality time with another player. You not only come to know of his strengths, but also of his weaknesses. As a bowler, you need to keep working on the weak zones. There is no denying the fact that he is the best in the business, but even the best has those little flaws which you can work on. You just need to pick on one factor and focus on that.

"Say for example, which has been the area that has troubled a batsman in recent times? You then work on that. I have dismissed him quite a few times (in the IPL) and without getting into much details, I will say you have to just work on the weak zone," he revealed.

Critics had started saying that Shami had become a red-ball specialist till he showed the world he can be a force to reckon with even in white-ball cricket. Now that he plays all the three formats, how different is the preparation going into a format? Shami says it is all in the mind. Mohammed Shami Provides Food to Labourer Who Fainted in Hunger Near His Home.

The coronavirus has given the cricketers an unforeseen break and that has also meant they have to keep on top of their fitness even though they cannot step out of the house and Shami says he is making most of the space he has in the farmhouse and also wants everyone to stay healthy even if they aren't sportspersons.

"I have a farmhouse and I am looking to utilise the space as I not only have a ground, but also fitness equipment. The training that we generally do when with the team, I can do that, but there is no denying that these are difficult times. When you are with the team in that environment and you are playing day-in and day-out, there is a difference as the body then reacts in that manner.

"Match practice is a different ball game altogether, but this situation isn't in anyone's hand and you have to work your way out of this. As a sportsperson you need to stay in top shape and if you don't have the facilities (indoors) then it is a problem in such a phase. In fact, I am also sharing workout videos on social media to help people understand the need to stay fit as it helps keep the mind fresh," he said.

And as someone who is widely followed, Shami wants the people of the country to stay safe and follow the directives of the government to the core.

"It is a very difficult time and conditions are not easy. Nobody ever thought that something like this will happen and to be honest we weren't prepared for this. It is a time where everyone has to come together. Most importantly, we are not used to staying indoors for so long. But that is the call of the hour and we must abide by the directions given to fight the pandemic. Also, I request everyone to use masks and sanitizers because that is the way forward," he signed off.

(The above story first appeared on LatestLY on Apr 17, 2020 04:06 PM IST. For more news and updates on politics, world, sports, entertainment and lifestyle, log on to our website latestly.com).