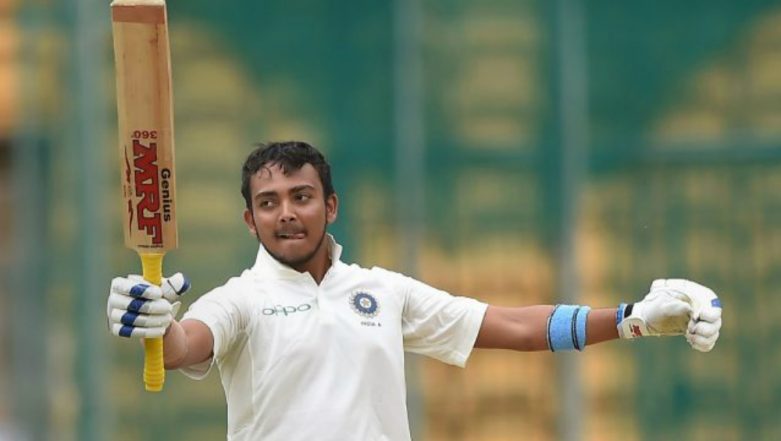 Prithvi Shaw is in line to get a call in the playing XI in the final test match against England at Kennington Oval | (Photo Credits: PTI)

Prithvi Shaw, who has often been termed as the next big thing in Indian cricket, may get a chance to play in the final test match at Kennington Oval in the ongoing test series between India and England. India have already lost the series to England in the fourth Test match at Rose Bowl, Southampton. India, chasing 245 for winning the match and keeping the series alive, were bundled for 184 in the second innings and lost the match by 60 runs. Prithvi Shaw Selected in Indian Squad: Sachin Tendulkar Had Predicted The Young Cricketer To Represent India 10 Years Ago.

A report in the Times of India said that Prithvi Shaw could replace the struggling and out-of-form KL Rahul. Shaw entered the squad courtesy Murali Vijay's exit from the squad. Vijay was pulled by the BCCI for underperforming in the first two tests. Prithvi Shaw, Hanuma Vihari Selected in India Test Team; BCCI Sends A Strong Message With Murali Vijay's Exclusion.

Prithvi Shaw has scored 1418 runs at an average of 56.72 in the 14 First-class matches he has played. He has seven centuries and 5 fifties to his name from 26 innings. Prithvi Shah, who is currently 18 years and 199 days old will become one of the youngest debutants for India if he gets a call for the fifth test to be played on September 7.