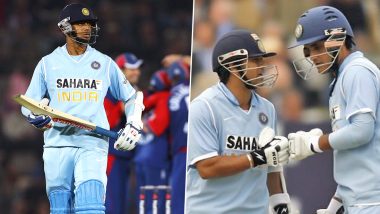 Winning the inaugural edition of T20 World Cup in 2007 will is certainly one of the biggest achievements in the history of Indian cricket. Under the leadership of MS Dhoni, an inexperienced Indian side defied all the odds and lifted the title. Before the tournament, however, many eyebrows were raised when veteran Indian players like Rahul Dravid, Sourav Ganguly and Sachin Tendulkar pulled out of the tournament in South Africa. In a recent interaction, Lalchand Rajput, who was team India’s manager during that time, revealed that it was Rahul Dravid who stopped Ganguly and Tendulkar from participating in the tournament. Rahul Dravid Beats Sachin Tendulkar in Wisden India's Poll for Greatest Indian Test Batsman.

“Yes, it is true (Rahul Dravid asked Sachin Tendulkar and Sourav Ganguly to not play the 2007 T20 World Cup),” Rajput said. “Rahul Dravid was the captain in England and some players came directly from England to Johannesburg (for the T20 World Cup) so they said ‘let’s give an opportunity to the youngsters’. But after winning the World Cup they must have repented it when we won the World Cup.

“Because Sachin always kept on telling me that I am playing for so many years and I have still not won the World Cup. Ultimately, he won in 2011, but he was dying to win that World Cup, and this team won on the first attempt,” he added.

Shedding lights on India’s campaign in the tournament, Rajput said that a big challenge was in front of them as there were plenty of the youngsters in the side but MS Dhoni believed that the side can lift the title which boosted the morale of the players.

“As a team, in a dressing room, the atmosphere should be very good. You should motivate players, and the players should not feel the pressure. Our theme during the World Cup was ‘tension lene ka nahi, dene ka (Don’t take tension, give tension)’. Dhoni really believed in the motto that people will talk things, but we need to focus on our strengths, and don’t have to worry about what others are saying,” said the former manager.

(The above story first appeared on LatestLY on Jun 29, 2020 03:35 PM IST. For more news and updates on politics, world, sports, entertainment and lifestyle, log on to our website latestly.com).