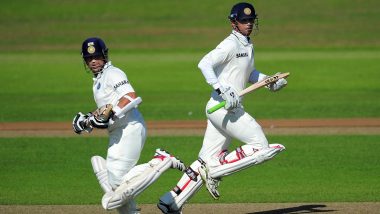 The poll was taken on Facebook and Dravid got 52 percent of the 11,400 votes that came in from fans. It started with a pool of 16 Indian batsmen and came down to a final four of Dravid against Sunil Gavaskar and Tendulkar against Virat Kohli. Sachin Tendulkar vs Rahul Dravid: Fans Debate Online After 'The Wall' Emerges 'Greatest Indian Test Batsman' in a Poll.

"Dravid ended with 52 per cent of the total votes – as many as 11,400 fans took part in the poll for the final – despite trailing at 42 per cent on Tuesday morning. Much like Dravid batted during his playing career, he dug in and fought back in the poll, eventually crossing the line with a decent lead at the very end," said Wisden India in its report.

Both Dravid and Tendulkar are regarded as two of the greatest batsmen of all time. They both have over 10,000 runs in Tests and ODIs. Both had different approaches to batting in Tests with Dravid famous for his ability to grind the opposition bowling to dust and Tendulkar being more of a stroke maker. Both players have also captained India at different points of their career and played under each other in the process.

(The above story first appeared on LatestLY on Jun 24, 2020 03:23 PM IST. For more news and updates on politics, world, sports, entertainment and lifestyle, log on to our website latestly.com).