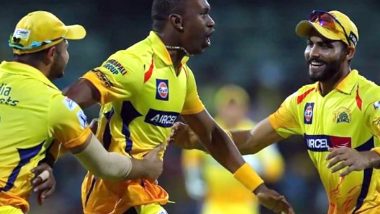 Royal Challengers Bangalore entered the game with four changes on the cards. Devudutt Padikkal and Virat Kohli gave a bright start to the team and by the end of the power play, they were on the score of 55 with no loss of wickets. Both batsmen made their way to the pavilion after scoring a half-century. Post this, none of the batsmen from RCB could capitalise on a good start and the team collapsed. By the end, they could only make 156 runs on the board. Dwayne Bravo scalped three wickets and shone for the team.

In response to this, Chennai Super Kings also had a watchful start to the game. Ruturaj Gaikwad was the highest scorer of the team with 38 runs. The best part is that the team had partnerships that could take them through. In the end, it was Chennai Super Kings who walked away with a win by six wickets. Now, let's have a look at the stat highlights of the game below:

#Chennai Super Kings score 59 runs in power-play which happens to be the highest total by the end of 6 overs.

#CSK is back to being on number one of the points table, whereas, RCB remains on number three.

During the post-match presentation, MS Dhoni said that his team was worried about the dew and opined that Ravindra Jadeja's spell was crucial. Bravo was labelled to be the Man of the Match.

(The above story first appeared on LatestLY on Sep 25, 2021 12:05 AM IST. For more news and updates on politics, world, sports, entertainment and lifestyle, log on to our website latestly.com).