Rohit Sharma Applauds India’s Fearless Approach, Says ‘No Matter What Hardships Came Our Way We Made It Through’ (See Post)

Rohit Sharma applauded the Indian team for their fearless approach in the India vs Australia Test series and shared how the tam overcame every hardship and obstacle that came their way and made through it. Rohit also revealed this was a Test series he will never forget. The Hitman shared his feeling with the fans on social media. 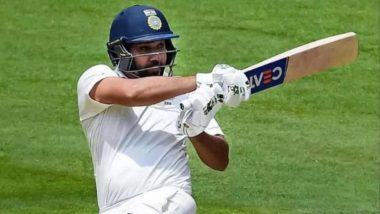 Rohit Sharma reacted to India’s Test series win in Australia and revealed the team overcame every obstacle and hardship that came their way and made through. India beat Australia by three wickets to end Australia’s 33-year unbeaten streak at The Gabba and also record consecutive Test series wins on Australian soil. India clinched the Test series 2-1 having lost the opening Test in a shambolic manner. Rohit shared a picture of the team posing with the Border-Gavaskar Trophy after winning the Test series. Ravi Shastri Credits Virat Kohli for India’s Self-Belief and Character After Historic Win in Gabba Test.

He captioned the picture with a short message. “An indescribable feeling for an indestructible team. No matter what hardships came our way we made it through,” wrote the Hitman on Twitter. “Everyone played fearlessly and it was truly a treat to watch. A game to remember forever. @BCCI” Take a look at his Twitter Post. Rishabh Pant’s First Tweet After Playing a Match-Winning Knock at the Gabba vs Australia Is All About Self-Confidence.

An indescribable feeling for an indestructible team. No matter what hardships came our way we made it through. Everyone played fearlessly and it was truly a treat to watch. A game to remember forever. @BCCI pic.twitter.com/kMuXBTEbkK

Rohit joined the Indian squad for the final two Test matches after recovering from a hamstring injury and also completing his quarantine in Australia. Rohit scored a half-century in the second innings of the Sydney Test and played an important role as a battered and bruised India inspired themselves to play a fighting draw and keep themselves alive in the series.

In the fourth Test at The Gabba, Rohit looked settled and scored a fine 44 runs in the first innings before being dismissed playing a rash shot. He was also named the vice-captain for the final two Test matches of the series.

Shubman Gill and Rishabh Pant were the stars for India in the final day of the Australia tour. Gill set the platform for the chase with a wonderful 91-run knock before Pant finished it and helped India secure victory with an unbeaten 89-run innings. Pant's knock was studded with nine boundaries and a maximum. Washington Sundar also played an important cameo and shared a 53-run stand with Pant to take India closer to a win before Pant scored the winning boundary.

(The above story first appeared on LatestLY on Jan 19, 2021 09:35 PM IST. For more news and updates on politics, world, sports, entertainment and lifestyle, log on to our website latestly.com).