Rohit Sharma Has a Heartfelt Message for Fans After Team India’s Exit From Cricket World Cup 2019, Says 'We Failed To Deliver When It Mattered' 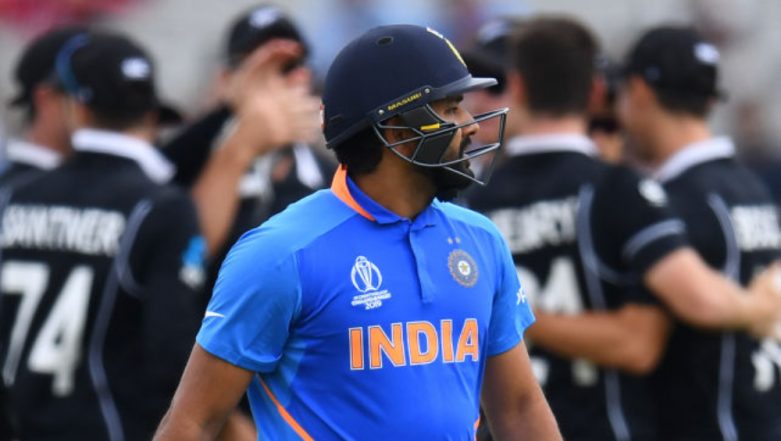 Following India’s exit from the ICC Cricket World Cup 2019 (CWC 2019), opening batsman Rohit Sharma shared a heartfelt message for fans. India lost to New Zealand in the first semi-final at Old Trafford in Manchester. Taking to Twitter, Rohit wrote: “We failed to deliver as a team when it mattered, 30 minutes of poor cricket yesterday & that snatched away our chance for the cup.” Review of Indian Cricket Team’s Journey in ICC World Cup 2019: Virat Kohli and Co Fall at the Knockout Hurdle.

The Indian opener added, “my heart is heavy as I’m sure yours is too.The support away from home was incredible. Thank you all for painting most of uk blue wherever we played.”

India failed to chase 240 after the semis was forced into the reserve day due to rains. Rohit, who had an impressive World Cup campaign, failed in the semis and was dismissed for just one run. Virat Kohli Puts Up A Brave Face After India’s Defeat Against New Zealand in CWC 2019 Semi-Finals; Thanks Fans for Their Support (Read Post). 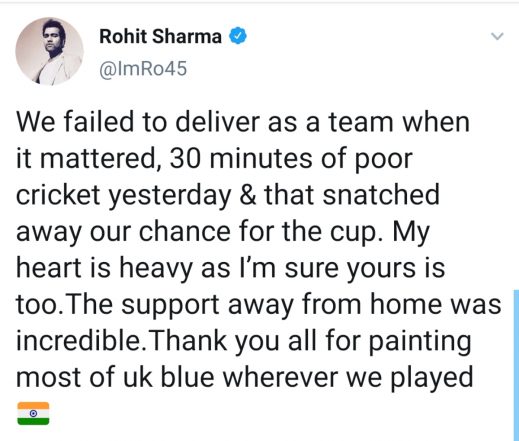 The right-handed batsman scored 648 from nine matches and is leading the list of most runs scored in CWC 2019. Rohit also scored five centuries during the CWC19, the most by a batsman in a single edition of the World Cup.

India topped the CWC19 points table with 15 points after the round-robin stage. India’s lone defeat in the first round came against home side England while their round-robin match against New Zealand was washed-out. Apart from these, India defeated each of their opponents.