Rohit Sharma Shouts ‘Not Now’ to Rain Gods Right Before Bringing Up His Sixth Century During IND vs SA, 3rd Test 2019! Here's How Twitterati Reacted to This Video 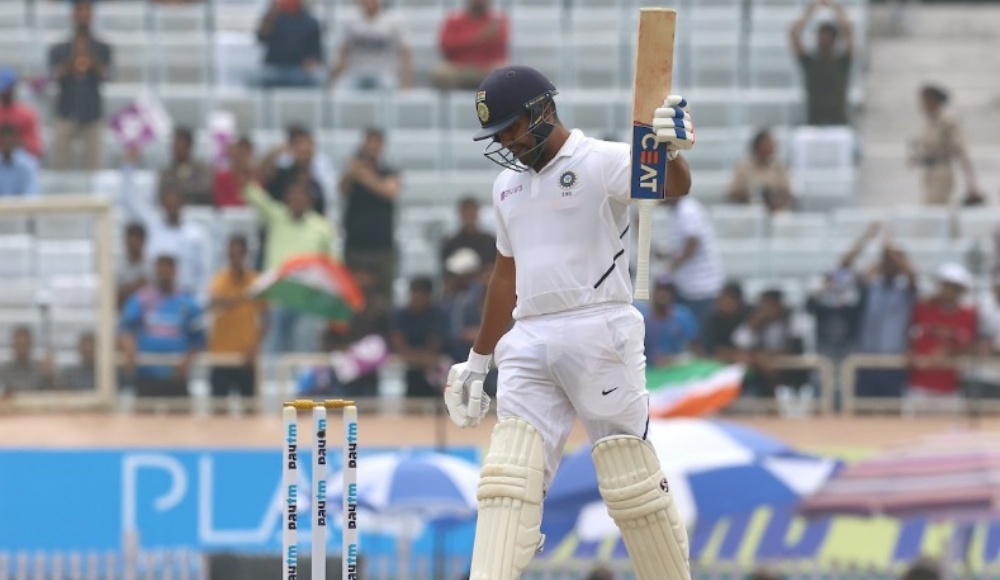 Rohit Sharma notched up his sixth century at the JSCA Stadium in Ranchi as he braved the killer spells from the South African bowlers. Wickets kept falling from the other end but Rohit Sharma held his nerves and looked good right from the start. Now a video surfaced online, where Sharma was seen shouting, “Not now" as the conditions got overcast and it started raining. Fortunately, the conditions cleared and the play continued. With this, Sharma brought up more than 2,000 runs in his Test career and also scored more than 400 runs against South Africa surpassing Mohammad Azharuddin. Twitterati also wanted the Rain Gods to be away. India Vs South Africa, Cricket Score 3rd Test Match.

His counterpart, Ajinkya Rahane also ringed in a half-century a while ago. In the first session, it was the South African bowlers who snapped three vital wickets of the home team. It looked as if, the Indians would be bundled out soon. But Rohit Sharma and Ajinkya Rahane gave a watchful start to the Indians and built up a strong partnership to change the fortunes for India post-lunch. Needless to say that the netizens hailed Sharma for displaying a classy game.

For now, check out the video of Sharma saying, “not now.”

Rohit Sharma the ball before his ton. Shouting 'Not now' as the rain begun to fall. Next ball - Six to bring up his 100 pic.twitter.com/firwEnZIPy

Rohit looked at the sky saying “NOT NOW”.

Groundsmen got ready to cover the ground.

Then, he simply hit a six over long off to get to a hard fought 💯. This is some confidence🔥#INDvSA #RohitSharma #Hitman pic.twitter.com/qbbDCzqs51

Congratulations!!! 🇮🇳✌️#hitman for his 6th test #Century and also going to complete his #2000run in test

Third hundred in the series

What an innings this is from #RohitSharma 👏

He brings up his third Test hundred of this series – his sixth in the format – with a six. #INDvSA https://t.co/NiocxlMlLw

As India headed for Tea, the team now stands on the score of 205 runs. Ajinkya Rahane and Rohit Sharma jointly brought in  166 runs for the side. Sharma batted at a strike rate of more than 70 runs whereas, Rahane at 64.