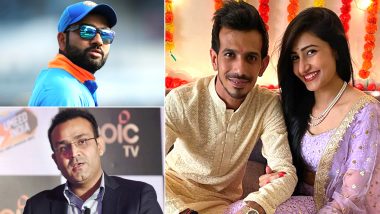 Indian cricketer Yuzvendra Chahal on Saturday (August 8, 2020) announced his engagement with Youtuber and Choreographer Dhanashree Verma. The 30-year-old spin bowler took to his social media to share the news with his fans. Greetings started pouring in as people sent their best wishes to the couple on their new journey. However, Rohit Sharma and Virender Sehwag extended greetings to Chahal while trolling him. Yuzvendra Chahal and Dhanashree Verma Get Engaged: Indian Spinner Shares Roka Ceremony Pics With Choreographer Fiance and Family.

Rohit Sharma and Yuzvendra Chahal share a great off-field relationship and are well-known for trolling each other on social media. And India’s limited over’s vice-captain continued that banter while wishing the Indian spinner on his engagement with a hilarious meme. Yuzvendra Chahal with a youngster in IPL 2050,' reads the meme where an old and a young RCB fan can be seen together. Yuzvendra Chahal and Dhanashree Verma Get Engaged: Times When the Couple Won Our Hearts With Their Social Media Posts.

Dhanashree Verma is a Youtuber and a Choreographer and owns a dance company named Dhanashree Verma Company. She has over 1.5 Million subscribers on her Youtube channel and is popular on social media for her dance videos.

Yuzvendra Chahal and Rohit Sharma will be back in cricketing action when they represent Royal Challengers Bangalore and Mumbai Indians in IPL 2020 respectively. The cash-rich league will be played from September 19 onwards in UAE after the initially planned schedule was postponed due to the coronavirus pandemic.

(The above story first appeared on LatestLY on Aug 09, 2020 06:45 PM IST. For more news and updates on politics, world, sports, entertainment and lifestyle, log on to our website latestly.com).