Yuzvendra Chahal and Dhanashree Verma Get Engaged: Times When the Couple Won Our Hearts With Their Social Media Posts 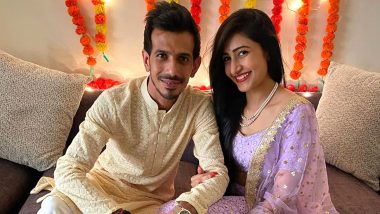 Indian cricketer Yuzvendra Chahal on August 8, 2020 (Thursday) announced his engagement to long-time girlfriend Dhanashree Verma. Chahal is known for his funny posts and videos while Dhanashree is a popular figure on social media as well. So as the couple enter new chapters of their lives, we take a look at the moments when they won our hearts on social media with their posts. Yuzvendra Chahal and Dhanashree Verma Get Engaged: Indian Spinner Shares Roka Ceremony Pics With Choreographer Fiance and Family.

Yuzvendra Chahal took to Instagram to make his engagement with girlfriend Dhanashree Verma official. ‘We said “Yes” along with our families,‘  the Indian cricketer captioned his post. The spin bowler shared photos from the Roka ceremony with his choreographer fiancé and family. Verma is a doctor, dance choreographer, YouTuber and has more than 450k followers on the social media website. Yuzvendra Chahal Announces Engagement to Choreographer and YouTube Personality Dhanashree Verma.

Dil bechara ❤️ The moment I heard this song I decided to give it my full support 🙏🏻 Really thankful to my mother who decided to be a part of this ❤️🔥 LINK IN BIO . Video edited by: It’s always a pleasure to work with @kishh.t who is super amazing & talented 🔥 . Music: dil bechara @arrahman @farahkhankunder @castingchhabra Goodluck with #dilbechara 💕 Choreography: yours truly @dhanashreevermacompany . @sonymusicindia @foxstarhindi @sanjanasanghi96 . . . . . #dhanashreeverma #dilbechara #sushantsinghrajput #dance #bollywood #bollywooddance #youtuber #choreographer #dancer

Click on the igtv icon to view full length video ❤️ This is one of my favourite routines which I was going to shoot with my favourite @sargunmehta just before the lockdown but we decided to shoot it later and chose to be safe 🤙🏻😊 we will definitely bring you something cracking after the lockdown until then enjoy this piece of choreography Let me know if you want the tutorial❤️ @radhikamadan @kareenakapoorkhan Angrezi medium Choreography: @dhanashreevermacompany . . . . . . #dhanashreeverma #nachannujeekarda #angrezimedium #kareenakapoor #choreographer #dancer #youtuber #youtube #bollywood #dance #sunday #stayhome #stayfit #fitness

Speaking of Yuzvendra Chahal, the cricketer will return to on-field action with Royal Challengers Bangalore during the latest edition of the Indian Premier League, which will be played in the United Arab Emirates later in the year. He will be eager to lead his side to the first IPL title in the franchise’s history.

IPL 2020 was originally planned to be held in March 2020 but the competition was indefinitely postponed due to the coronavirus outbreak. However, the cash-rich league will now be played in UAE starting from September 19, 2020 but fans will not be allowed inside the stadiums.

(The above story first appeared on LatestLY on Aug 08, 2020 06:10 PM IST. For more news and updates on politics, world, sports, entertainment and lifestyle, log on to our website latestly.com).