Chennai Super Kings have been absolutely dominant this season and despite qualifying for the playoffs, they would not take this game -lightly as now, MS Dhoni's side would eye a top-two finish. Rajasthan meanwhile, have to win to keep their playoff hopes alive. 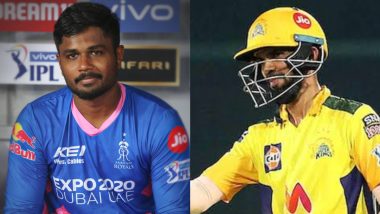 Rajasthan Royals face an uphill task when they face Chennai Super Kings in match 47 of the Indian Premier League 2021 on Saturday, October 2. The match would be played at the Sheikh Zayed Stadium in Abu Dhabi and would begin at 7:30 pm IST (Indian Standard Time). Rajasthan Royals need a win at any cost from this match as they find themselves in the seventh spot on the points table with just eight points from 11 games. Nothing really has been very positive for them barring their miraculous win against Punjab Kings earlier in the UAE leg of IPL 2021. Despite captain Sanju Samson leading from the front, he has hardly received any support from his teammates as they now not just need to win all there matches but also hope that other results go their way. RR vs CSK Preview

Chennai Super Kings, who have already qualified for the playoffs, would look at this game as a platform for potentially testing out some of their bench players. Although that is something which is unlikely, as CSK still need to ensure a top-two finish to have two shots at making it to the final. The captain of a Dream11 Fantasy Team fetches double points while the vice-captain multiplies the points x1.5 times. Let us take a look at the recommended options for the captain and vice-captain's slot for this match. RR vs CSK, IPL 2021 Live Cricket Streaming: Watch Free Telecast of Rajasthan Royals vs Chennai Super Kings on Star Sports and Disney+Hotstar Online

The right-hander has been one of the most impressive players for Chennai Super Kings all season and has taken up his performance by a notch in the UAE leg of IPL 2021. From bailing his side out from a precarious position to providing good starts, Gaikwad has been a real find for the Chennai Super Kings. He has scored a total of 407 runs this season and with his consistency, it would be a good choice if he is picked as captain.

Despite Rajasthan Royals failing to perform as a unit, their captain Sanju Samson has been in fine form, going about his run-scoring business pretty consistently and easily and it is absolutely not a surprise to see him occupy the third spot in the list of highest run-getters this season with 452 runs to his name.

(The above story first appeared on LatestLY on Oct 02, 2021 05:07 PM IST. For more news and updates on politics, world, sports, entertainment and lifestyle, log on to our website latestly.com).