In the high-scoring game, it was Calum MacLeod who laid a solid platform for Scotland’s win. 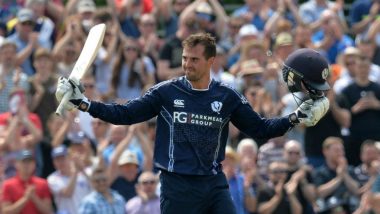 Calum MacLeod smashed unbeaten 140 off just 94 balls as Scotland pulled off their maiden win over England across formats. Batting first, hosts Scotland posted a mammoth total of 371 for five, their highest-ever in One-Day Internationals (ODIs). In response, England fell short of the target by six runs as they were bowled out in 48.5 overs. In this high-scoring game, it was MacLeod who laid a solid platform for Scotland’s win. Interestingly, England are ranked number one in ODIs.

Coming in at number three, the 29-year-old right-handed batsman attacked England bowlers right from the beginning and collected 16 fours and three sixes during his stay. This was MacLeod’s seventh ODI century. Apart from him, Scotland captain Kyle Coetzer and George Munsey scored 58 and 55 respectively. Scotland vs England ODI- Full Scorecard.

MacLeod was involved in two big partnerships and that helped Scotland post such a big total. He first added 93 for the third wicket with Richie Berrington and then shared 107-run stand for the fourth wicket with Munsey. The right-hander reached the three-figure mark off 70 balls, fastest by a Scotland batsman. Meanwhile, this was the first instance of a Scotland batsman scoring a ton against England.

Here’s a look back at some of the shots Calum MacLeod played during his impressive knock:

England’s Jonny Bairstow also scored a century in the match. The right-hander, opening the innings, notched the three-figure mark off just 54 balls. He, however, was soon dismissed after that and ended with 105 off 59 balls.

After the 129-run opening stand between Bairstow and Jason Roy, Scotland kept picking wickets at regular intervals. Towards the end, Moeen Ali and Liam Plunkett added a 71-run stand for the eighth wicket to keep England in the hunt. However, needing 25 off 28 balls, Moeen was caught at long-on and that changed the game in Scotland’s favour. In 49th over, England lost last two wickets as Scotland completed a famous win.

(The above story first appeared on LatestLY on Jun 11, 2018 09:36 AM IST. For more news and updates on politics, world, sports, entertainment and lifestyle, log on to our website latestly.com).