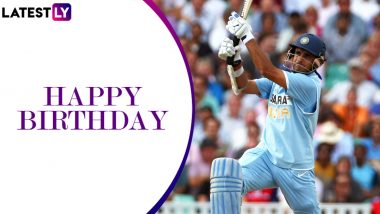 Former Indian captain and current BCCI president, Sourav Ganguly celebrates his 48th birthday on July 08, 2020 (Wednesday). Ganguly, born in Kolkata on this day in 1972, is widely celebrated as one of India’s most successful captains and among the greatest left-handed batsman cricket has witnessed. His elegant strokes through the covers earned him the nickname “God of the Offside”. Ganguly’s former India teammate Rahul Dravid, while describing Ganguly’s prowess in the finding the boundary with a simple stroke square of the wicket, once famously quoted “On the offside, there is God and then there is Sourav Ganguly.” Sourav Ganguly Says Life Will Be Normal Once the COVID-19 Vaccine Is Out.

Initially, written off after a disaster ODI debut against the West Indies, Ganguly made most of a second call-up to the national team and smashed a century on Test debut against England at the iconic Lord’s Cricket Ground. He went on and scored a second consecutive hundred in the very next Test and didn’t have look back from there.

Just four years within his maiden Test appearance, Ganguly was handed the captaincy, after then skipper Sachin Tendulkar resigned from the role, at a time when Indian cricket was rocked by massive spot-fixing allegations. But Ganguly lifted the country and helped India take first steps towards greatness yet again. As the ‘Maharaj’ of Indian cricket turns 48, take a look at some interesting facts about Sourav Ganguly.

One of India’s most successful captain, Ganguly enjoyed an illustrious career of 16 years before calling it quits in 2008. He played his last international match on November 6, 2008, against Australia. He scored a first-ball duck in his final innings and set the rare record of scoring a century on debut and a duck in last innings. Ganguly represented India in 113 Test matches and scored 7212runs while he also played 311 ODIs and amassed 11,363 runs for the national team. Happy Birthday Maharaj!

(The above story first appeared on LatestLY on Jul 07, 2020 09:30 PM IST. For more news and updates on politics, world, sports, entertainment and lifestyle, log on to our website latestly.com).