South Africa spinner Keshav Maharaj was on Monday rewarded for his excellent recent form by being named the ICC Men's Player of the Month for April 2022. 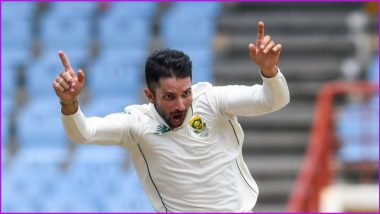 Dubai, May 9 : South Africa spinner Keshav Maharaj was on Monday rewarded for his excellent recent form by being named the ICC Men's Player of the Month for April 2022. Maharaj was at his brilliant best during the Proteas' recent two-match Test series against Bangladesh as he beat fellow South African Simon Harmer and Oman opener Jatinder Singh for the monthly award. Mohammad Rizwan Given Banned Substance for Recovery Before Pakistan’s T20 World Cup 2021 Semifinal Against Australia.

It was a well-deserved award for Maharaj, who contributed 16 wickets for South Africa during the Test series and claimed the Player-of-the-Series award in the process. His exploits weren't just with the ball either, with Maharaj scoring a belligerent 84 with the bat during the second Test in Port Elizabeth as South Africa wrapped up a 2-0 series triumph on home soil. "A simply outstanding few weeks showcasing true grit and determination," former South Africa batter and current voting panel member JP Duminy said of the 32-year-old Maharaj. IPL 2022 Exploits of England Players Could Become a Template for Their Success in T20 World Cup 2022.

"Exceptional to see him work in tandem with Simon Harmer in exploiting the skills that we've always known to be there." Fellow voting panel member Lisa Sthalekar echoed Duminy's sentiments, with the Australian legend making note of Maharaj's valuable late runs with the bat. "He was a key member to the success of the series for South Africa," ICC Hall of Fame Sthalekar said. "The amount of wickets at crucial times was exceptional and late runs was one of the main reasons for their success."

(The above story first appeared on LatestLY on May 09, 2022 04:25 PM IST. For more news and updates on politics, world, sports, entertainment and lifestyle, log on to our website latestly.com).