Rizwan had to be admitted to a hospital before the match with a chest infection but he was able to recover in time to be fit for the game. He scored 67 runs to help Pakistan post a good total. But eventually, his side ended up on the losing side. 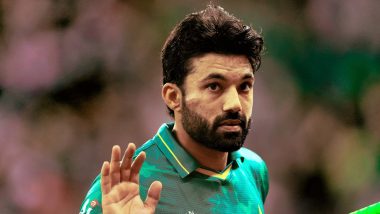 There could be trouble in store for Mohammad Rizwan after it came to light that he was injected with a banned substance ahead of his team's T20 World Cup semifinal against Australia last year. The Pakistan wicket-keeper batter, who had been in great form in the competition, had to be hospitalized with a chest infection before the crucial semifinal against Australia. And in an interview with the player, Pakistan Cricket Board (PCB) doctor Najeebullah Soomro revealed that he had injected the prohibited substance, but only after informing the ICC about it. Pakistan To Play Only Two Tests in Sri Lanka As ODI Series Scrapped: Report

The right-hander turned up for the semifinal and even smashed his way to 67 runs off 52 deliveries with three fours and four sixes. His performance did give Pakistan a competitive total on the board but eventually, they ended up on the losing side, by five wickets. Australia then went on to win the title.

Rizwan had a memorable year, especially with the bat in the shortest version of the game. He became the first batter to score more than 1000 runs in T20Is in one calendar year, winning the ICC Men's T20I player of the year Award.

(The above story first appeared on LatestLY on May 09, 2022 04:02 PM IST. For more news and updates on politics, world, sports, entertainment and lifestyle, log on to our website latestly.com).