Four England cricketers making quite a statement in IPL 2022, bodes well for their white-ball side as it prepares for the ICC T20 World Cup in Australia later this year. 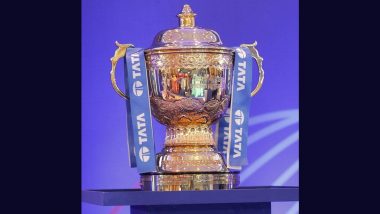 Mumbai, May 9: Four England cricketers making quite a statement in IPL 2022, bodes well for their white-ball side as it prepares for the ICC T20 World Cup in Australia later this year. With right-hander Jos Buttler doing exceptionally well for Rajasthan Royals and Liam Livingstone and Jonny Bairstow making a statement for Punjab Kings, spin-bowling stalwart and handy batter Moeen Ali joined the party when he took three crucial wickets as Chennai Super Kings thrashed Delhi Capitals at the DY Patil Stadium by 91 runs on Sunday night. MI vs KKR, IPL 2022 Live Cricket Streaming: Watch Free Telecast of Mumbai Indians vs Kolkata Knight Riders on Star Sports and Disney+ Hotstar Online.

On Sunday, thanks to Moeen's three-wicket effort (3/13 in four overs) and New Zealand batter Devon Conway's 49-ball 87, defending champions CSK climbed a rung, to No. 8 on the IPL table with eight points, to keep their faint hopes of qualifying for the playoffs alive. Moeen, it seems, has turned back the clock with consecutive impressive performances at the IPL. He has taken five wickets from his last two matches, and those scalps have included the likes of world-class players such as Virat Kohli, Faf du Plessis, Mitch Marsh and Rishabh Pant.

The experienced 34-year-old could prove difficult to face at the T20 World Cup in Australia later this year, and it would be no surprise if he picks up a place in the squad, given his utility to the side. The veteran spinner had played a key role in the ICC T20 World Cup last year in the UAE as well, having vital contributions with both bat and ball as the Eoin Morgan-led England made it to the semifinals. They lost to New Zealand in the last-four clash but not before Moeen emerged as the only player in the side to score an unbeaten half-century in the match. CSK vs DC, IPL 2022: DC Coach Ricky Ponting Admits Loss Against CSK Will Be 'Huge Dent' in Team's Net Run-rate.

Right-hand batter Jos Buttler too continues to dominate at the top of the order for Rajasthan Royals, having now amassed a total of 618 runs from 11 innings to be the leading run scorer at the tournament. Buttler has three centuries and three half-centuries to his name and his strike rate of 152.21 is among the best for all batters. Liam Livingstone is impressing at Punjab Kings with 315 runs from 11 innings, while veteran Jonny Bairstow has 136 runs from eight hits for Punjab Kings. The four could end up becoming the combination England need to lift the T20 World Cup trophy in Australia this year after their near miss in the tournament last year.

(The above story first appeared on LatestLY on May 09, 2022 01:57 PM IST. For more news and updates on politics, world, sports, entertainment and lifestyle, log on to our website latestly.com).