Sunrisers Hyderabad takes on Royal Challengers Bangalore in the IPL 2022 as things heat up for the playoffs spots. For SRH vs RCB live streaming online and live TV telecast you can scroll down. 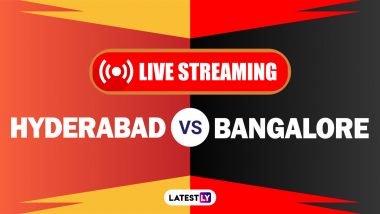 Sunrisers Hyderabad have an important game coming up against the Royal Challengers Bangalore with the team looking to halt a three-game losing streak. The Kane Williamson led outfit had a poor start to the campaign but looked to have arrested the slide but off late have hit the stumbling block again. With several teams breathing down each other’s necks, the road to play-offs is going to be a highly competitive affair. The Royal Challengers Bangalore come into the match on the back of a much needed victory against Chennai and start the contest in the top four. They have had their troubles this season but have refused to down their tools. IPL 2022 Playoffs Qualification Scenario Explained: Here’s a Look at the Chances of GT, RR, SRH, LSG, RCB, PBKS, DC, KKR, and CSK of Making It To Last Four.

Kane Williamson’s batting has been more of a problem for his team with poor strike rate being a problem. Nicholas Pooran and Aiden Markram have been the mainstays of the batting unit and a lot will depend on them in the match against Bangalore. Sean Abbott was a touch expensive against Delhi but he has the potential to pick up wickets and the team management will likely stick with him.

Virat Kohli like Kane Williamson has struggled with his form and is another high profile player that has batted with a poor strike rate. This has often put the middle order under considerable pressure and Bangalore will need the former Indian skipper to fire on all cylinders. Harshal Patel, who has been in the new recently for his bust up on the field, is the go to man of the bowling unit. He along with Wanindu Hasaranga can hurt SRH. SRH vs RCB Dream11 Team Prediction IPL 2022: Tips To Pick Best Fantasy Playing XI for Sunrisers Hyderabad vs Royal Challengers Bangalore Indian Premier League Season 15 Match 54.

Those unable to watch the SRH vs RCB match live on television can follow the game online. Disney+ Hotstar will be live streaming the Sunrisers Hyderabad vs Royal Challengers Bangalore match online for its fans in India. Fans, however, need to subscribe to Hotstar by paying a nominal subscription fee. Bangalore are a more balanced outfit in comparison to Hyderabad and start the contest as the favoruites to win.

(The above story first appeared on LatestLY on May 08, 2022 01:25 PM IST. For more news and updates on politics, world, sports, entertainment and lifestyle, log on to our website latestly.com).