The KKR all-rounder could return to action when Kolkata play Sunrisers Hyderabad in IPL 2020 on Sunday. Narine was reported for bowling with a suspect action after the match against Kings XI Punjab on October 10 and he had been working with the coaches since to clear his name from the suspect warning list. 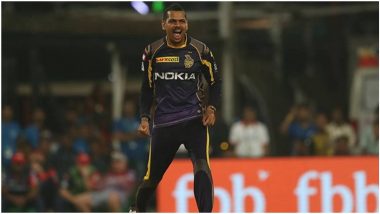 In what comes as a big boost for Kolkata Knight Riders, Sunil Narine has been cleared by the IPL’s suspect action bowling committee and can bowl for the rest of the IPL 2020 without any worry. Narine’s name has been taken off the suspect bowling action warning list and he is now free to play. The KKR all-rounder could return to action when Kolkata play Sunrisers Hyderabad in IPL 2020 on Sunday. Narine was reported for bowling with a suspect action after the match against Kings XI Punjab on October 10 and he had been working with the coaches since to clear his name from the suspect warning list. SRH vs KKR Preview: 7 Things You Need to Know About Dream11 IPL 2020 Match 35.

KKR won the match against Kings XI Punjab by two runs with Narine bowling the death overs and also the decisive final over of the match. But the West Indian was later reported for a suspect action and was placed on a warning list leaving him on the edge of being suspended for the rest of IPL 2020 if he was reported again. The report, however, did not bar Narine from bowling. But he was left out from the playing XI for the next two games – both of which KKR lost by huge margins – with the team management working on his action. SRH vs KKR IPL 2020 Dream11 Team: Eoin Morgan, Rashid Khan and Other Key Players You Must Pick in Your Fantasy Playing XI.

The KKR team management had also requested the IPL suspect action committee for an official assessment of Narine’s action. KKR had submitted action footage of Narine’s action in slow motion with back and side angles. The committee reviewed the action and concluded after studying the footage that the ‘elbow bend’ was within the permissible limit.

"KKR requested for an Official Assessment of Mr Narine's action from the IPL Suspect Bowling Action Committee, submitting action footage in slow motion with back and side angles,” said an IPL press release. “The Committee carefully reviewed all the deliveries of action footage sent of Mr Narine with the naked eye and has come to the conclusion that the elbow-bend appears to be within the range of permissible limits.

"The Committee also noted that Mr. Narine should reproduce the same action going forward in the IPL 2020 matches as presented to the Committee in the video footage. Mr Narine has now been removed from the IPL Suspect Action Warning List," the release stated.

Narine has now been from the suspect bowling action warning list and is likely to make his return back into the KKR playing XI against Sunrisers Hyderabad later in the day. Both SRH and KKR find themselves in a must-win after consecutive defeats and need to win to stay alive in the race for the playoffs. KKR are on eight points while SRH was on six points after eight games each.

Narine, 32, was first reported for illegal bowling action in 2014 during the Champions League T20 tournament. The spinner had even missed the 2015 World Cup to work on his bowling action. He returned to IPL 2015 but was once again reported for the suspect action and eventually suspended from bowling in November later that year.

He has been cleared by the International Cricket Council in 2016. But has faced problems with the action and was once again reported in 2018 before last week's warning.

(The above story first appeared on LatestLY on Oct 18, 2020 01:35 PM IST. For more news and updates on politics, world, sports, entertainment and lifestyle, log on to our website latestly.com).