SRH vs KKR IPL 2020 Dream11 Team: Eoin Morgan, Rashid Khan and Other Key Players You Must Pick in Your Fantasy Playing XI

Both teams find themselves in a similar position and enter this contest on the back of successive defeats in their previous two games. But KKR have always had the upper hand over Sunriser Hyderabad and lead Warner's side 11-7 in head-to-head meetings. They beat SRH by seven wickets in the reverse fixture earlier this season. 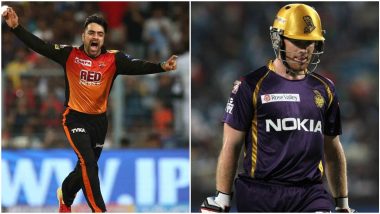 Sunrisers Hyderabad have a crucial game coming up against the Kolkata Knight Riders which where they will look to stem their run of losses. The David Warner-led side are currently fifth in the points table with 6 points from 8 games. Hyderabad is known for its presence in the play-offs season after season and in order to repeat the same this season, they will need a strong second half of the tournament. Opponents KKR are marginally better at fourth but come into the game on the back of consecutive defeats. Change in leadership did not yield the right results against Mumbai and Eoin Morgan will hope there is a change in fortune against Hyderabad. SRH vs KKR Preview: 7 Things You Need to Know About Dream11 IPL 2020 Match 35.

Dream11 fantasy gaming platform is quite popular among cricket fans who select their teams to win some cash. Team selection with best picks is always a winning formula in Dream11. The SRH vs KKR game can be a bit of a tough one for all the Dream11 fantasy players with so many talented names doing the rounds. Here we pick five players that must be part of every team for the SRH vs KKR IPL 2020 match. SRH vs KKR Dream11 Team Prediction IPL 2020: Tips to Pick Best Fantasy Playing XI for Sunrisers Hyderabad vs Kolkata Knight Riders Indian Premier League Season 13 Match 35.

His average may have dipped drastically compared to the staggering numbers of last two years but David Warner remains a safe bet. He will get handy runs up top against Kolkata’s bowling unit which looked hapless against Mumbai in their last game.

David Warner’s opening partner has an important role to play in the game as he looks to give SRH a bright start. The wicket-keeper batsman’s numbers may have come down his year like his skipper but still remains a threat especially in the powerplay.

A yield of 10 wickets in 8 games is considered brilliant for many bowlers but when you are a player of the stature of Rashid Khan, the expectations are certainly higher than this. He has an economy rate of below 6 which is considered pure gold in T20 cricket. SRH will want Rashid Khan to tie the KKR middle order down by chipping in with wickets.

KKR’s best player with the bat, skipper Eoin Morgan is tailor-made for T20 cricket. Be it batting first or in a chase, Eoin Morgan knows how to time his innings. An effortless hitter, Eoin Morgan is certain to provide good returns in terms of batting points.

With two fifties, Shubman Gill has perhaps been the standout player with the bat for KKR this season. He has tackled the new bowl well, scoring freely in the powerplays. Shubman Gill plays with a kind of maturity which is rare for someone his age.

Both teams find themselves in a similar position and enter this contest on the back of successive defeats in their previous two games. But KKR have always had the upper hand over Sunriser Hyderabad and lead Warner's side 11-7 in head-to-head meetings. They beat SRH by seven wickets in the reverse fixture earlier this season.

(The above story first appeared on LatestLY on Oct 17, 2020 10:16 PM IST. For more news and updates on politics, world, sports, entertainment and lifestyle, log on to our website latestly.com).