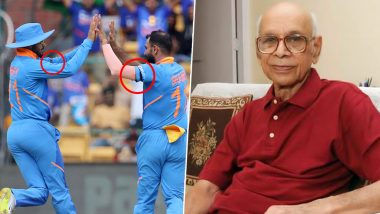 Indian players wore black armbands when they stepped out for the 3rd and final ODI match against Australia to pay respect to the late Bapu Nadkarni. A former Indian international and Mumbai great, Bapu Nadkarni passed away on January 17, 2020 (Friday) at his residence at the age of 86. India vs Australia 3rd ODI match will be played at the M Chinnaswamy Stadium in Bangalore with the match also being the series decider. The three-match ODI series is currently locked on 1-1 with Australia winning the 1st ODI match and India bouncing back in the next to level the series. Meanwhile, Australia captain Aaron Finch have won the toss and opted to bat first with India going with an unchanged playing XI. India vs Australia Live Score 3rd ODI 2020.

Skipper Virat Kohli was seen wearing a black armband on his sleeve when he came out for the toss. Minutes later the entire Indian team could be seen wearing armbands when they came out for the national anthem. Sanjay Manjrekar in the commentary box later confirmed that the Indian team was wearing black armbands commemorate the late Bapu Nadkarni, who passed away two days before the 3rd ODI match.

Bapu Nadkarni, who represented India in 41 Test matches, passed away due to old-age related issues at the age of 86. The former Indian all-rounder was best remembered for bowling a record 21 successive maiden overs in a Test match against England. Bapu scored 1414 runs and took 88 wickets in his international career. But he is best known for his economy rate, which is the second-best in history among bowlers with 50 or more Test wickets.

Meanwhile, Australia were forced into making a change to the team that took the field with Kane Richardson reported to be not in good health after playing two games inside three days. Richardson was replaced by Josh Hazlewood in the playing XI. India, on the other, went with an unchanged playing XI with KL Rahul keeping the gloves despite Rishabh Pant being fit. Indian opening pair of Rohit Sharma and Shikhar Dhawan – both of whom suffered minor injuries in the previous game – also passed the fitness test in time to be included.

Australia fought back from 0-2 down to beat India 3-2 in five-match ODI series when both sides last met in a bilateral ODI series in India. They will hope to post a respectable target on board and then successfully defend it to repeat the feat.

(The above story first appeared on LatestLY on Jan 19, 2020 02:23 PM IST. For more news and updates on politics, world, sports, entertainment and lifestyle, log on to our website latestly.com).