Virat Kohli earlier had made it clear that he would step down from India's T20I captaincy after the T20 World Cup 2021 and although it was a disappointing tournament with them failing to reach the semifinals, the 33-year old's last match as skipper ended with a win over Namibia. Kohli also hinted at Rohit Sharma being the next T20I captain. 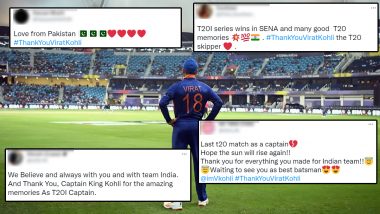 A collage of wishes for Virat Kohli after his last match as India's T20I captain (Photo credit: Twitter)

Virat Kohli signed off as India's T20I captain with a win over Namibia in the T20 World Cup 2021 on Monday, November 8. It was not the ending he would have wanted since India were already out of contention for a place in the T20 World Cup semifinals, but an episode in Indian T20I cricket came to an end as Kohli played the last game as captain of the team. Following the match, fans took to Twitter to thank the 33-year old for his services as T20I captain, recalling the good times they had with him at the helm and also wishing him good luck for his role in the side as a batsman. Virat Kohli Reflects on India’s Performance at T20 World Cup 2021, Writes, ‘We Will Aim To Come Back Stronger’ (Check Post)

And in no time, #ThankYouViratKohli started trending on Twitter with fans expressing their gratitude to the former Indian T20I captain for all the memories he has made with the team. Take a look at some of the tweets below:

All Good Things Must Come to an End:

Thankyou for ur services @imVkohli.

‘We Love You Virat’

The First and the Last Matches of Kohli As India’s T20I Captain:

From this To this

Thank You Champ 💓 For Everything You Have Done To Shorter Format 👏🏻🙌🏼 & Keep Entertaining Us In Long Format's 🥳🥁 @imVkohli#ThankYouViratKohli 🇮🇳👑 pic.twitter.com/dS97bu0sVc

‘Unluckiest Captain India Ever Had’

Probably the unluckiest captian India has ever had💔 #ThankYouViratKohli

For being the leader who lead the team from the front

Will always feel sad that u haven't got the kind of end of Captaincy that u deserved💔💔 pic.twitter.com/5U9K8wzS1X

‘The Sun Will Rise Again’

Last t20 match as a captain💔

Hope the sun will rise again!!

Thank you for everything you made for Indian team!!😇😇Waiting to see you as best batsman😍😍 @imVkohli #ThankYouViratKohli pic.twitter.com/VtNIX6MmUS

don't worry he is still a captain in ODI format , 2023 world cup we are coming 💙 till thn #ThankYouViratKohli pic.twitter.com/GJ8JEZLlIq

We Believe and always with you and with team India. And Thank You, Captain King Kohli for the amazing memories As T20I Captain.#ThankYouViratKohli pic.twitter.com/eQyl17MXZs

Kohli, while speaking at the toss, also hinted that Rohit Sharma is the next in line to take over the captaincy of India's T20I side. With new coach Rahul Dravid already appointed, it is going to be a new era in Indian cricket.

(The above story first appeared on LatestLY on Nov 09, 2021 09:29 AM IST. For more news and updates on politics, world, sports, entertainment and lifestyle, log on to our website latestly.com).