The wicketkeeper-batsman resigned from Australia's Test captaincy after his involvement with a colleague in a sexting scandal was made public. He is still a part of the squad and is expected to feature in the first Test on December 8. 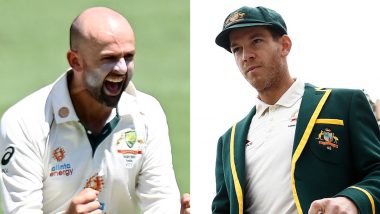 Australia's preparation for the 2021 Ashes at home took a big hit when Tim Paine stepped down as skipper of the side after his involvement with a colleague in a sexting scandal was made public. The wicket-keeper batsman subsequently relinquished captaincy of the side ahead of an important Test series against England. But ace off-spinner Nathan Lyon came out in support of his former Test captain and said that Paine is the 'best keeper in the world'. Tim Paine Sexting Scandal: ‘Feel Frustrated the Scandal Has Been Aired in Public’, Says Australian Cricketer’s Wife Bonnie

"The selectors always said they were going to pick the best available XI and in my eyes Tim Paine is the best keeper in the world.  I know I want him. This is very selfish from a bowler's point of view, I want the best gloveman behind the stumps. In my eyes, that's Tim Paine," the off-spinner said, as quoted by cricket.com.au. He added, "Every (Test) bowler's relationship with (Paine) is exceptional and Tim Paine is a very lovable guy and a very well-respected guy within the changeroom. I think every bowler – I'm pretty sure I'm speaking on behalf of every bowler –we want the best keeper. As I keep saying, I can't say it any more times, Tim is the best keeper in the world." Tim Paine Sexting Scandal: Wicketkeeper-Batsman Steps Down as Australia's Test Captain Days Before Ashes 2021

Paine also recovered from neck surgery and his involvement in off-field incidents did not seem to distract him from the task at hand--to prepare well for the Ashes. The wicketkeeper put up a good performance, taking eight catches in a Marsh One-Day Cup match after the surgery. He is expected to travel to Brisbane on Saturday with the Test team coming together on Tuesday. Cricket Australia are however yet to name Paine's replacement as Test skipper with many reports claiming fast bowler Pat Cummins to be the frontrunner for this role.

(The above story first appeared on LatestLY on Nov 25, 2021 06:55 PM IST. For more news and updates on politics, world, sports, entertainment and lifestyle, log on to our website latestly.com).