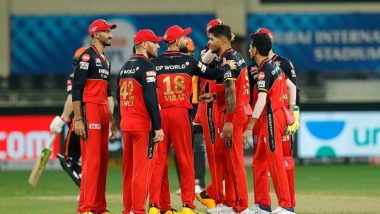 Virat Kohli’s Royal Challengers Bangalore had a gala time in their first outing of the Dream11 IPL 2020 as they went on to beat the Sunrisers Hyderabad. Contrary to the popular expectations, RCB won the first game in the IPL 2020 as they defeated the Sunrisers Hyderabad by 10 runs. It was Devdutt Padikkal who shone for the team as he scored 56 runs from 42 balls and then AB de Villiers came up with yet another explosive knock of 51 runs from 30 balls. In the end, it was Yuzvendra Chahal who chipped in with two wickets which changed the course of the game. SRH vs RCB Stat Highlights IPL 2020: Debutant Devdutt Padikkal, AB de Villiers, Yuzvendra Chahal Shine As Royal Challengers Bangalore Win by 10 Runs.

The match started off with Sunrisers Hyderabad winning the toss and electing to bowl first. Devdutt Padikkal was blazing guns in the opening slot alongside Aaron Finch, but the England captain made way to the pavilion on 29 runs. Virat Kohli too did not last for a very long time. Then it was AB de Villers who came up with a half-century that ushered RCB to a total of 163 runs. From SRH, only Jonny Bairstow and Manish Pandey were the ones who batted well as they made 61 and 34 runs respectively. Meanwhile, Yuzi scalped the wickets of Bairstow, Pandey and Vijay Shankar and led the team to a win.

Needless to say that Virat Kohli was quite happy with the team's win and he posted a tweet on social media appreciating well-earned victory. Check out the post below:

Off to a great start. Well done lads. We march on 💪💪 #PlayBold @royalchallengersbangalore

RCB will next play the next game against Kings XI Punjab on September 24, 2020. Sunrisers Hyderabad will be locking horns against the Kolkata Knight Riders on September 26, 2020.

(The above story first appeared on LatestLY on Sep 22, 2020 09:04 AM IST. For more news and updates on politics, world, sports, entertainment and lifestyle, log on to our website latestly.com).