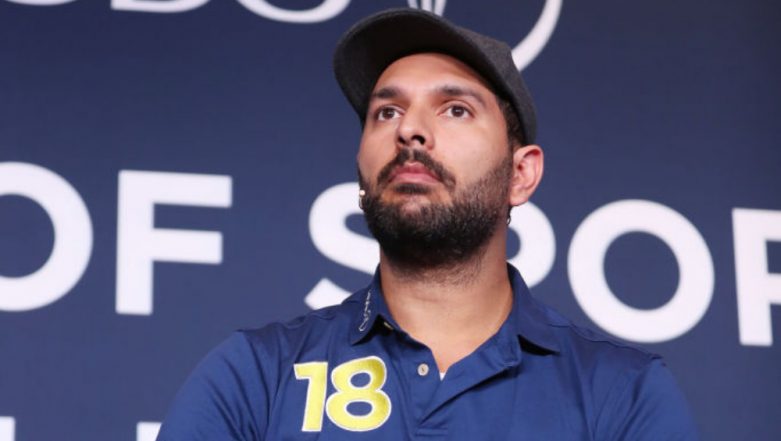 Having announced his retirement from International cricket and Indian Premier League (IPL) Yuvraj Singh said that he is looking at possibilities to play in various T20 league around the world. The star batsman is hoping to get Board of Control for Cricket’s (BCCI) permission for that. And if all goes well who knows we can see Yuvraj play in leagues like Pakistan Super League (PSL), Big Bash League (BBL) and other T20 tournaments. Yuvraj Singh Retirement: As Yuvi Retires From Cricket, Here’s a Look Back at His 6 Sixes Off Stuart Broad During 2007 T20 World Cup Against England; Watch Video.

"I want to play T20 cricket. At this age I can manage to play some kind of fun cricket. I want to go and enjoy my life. It's been too stressful just thinking about my international career, performing and big tournaments like the IPL," said Yuvraj while announcing his retirement.

"Now I would like to enjoy myself. With BCCI's permission, I would like to go and play. Just have fun for this year and maybe next year, whatever is left in me. It's been a very long and hard journey and I think I deserve that," Yuvraj added. Yuvraj Singh Retirement: As Yuvi Retires From Cricket, Here’s a Look Back at His 6 Sixes Off Stuart Broad During 2007 T20 World Cup Against England; Watch Video.

Meanwhile, as per a report Yuvraj is likely to get permission from BCCI. “He has not yet written to the board and once he does that, then only we can consider his case. But since he will not be playing the IPL, there is little ground for not giving him the permission. Retired players of his stature have been allowed to play outside India," a BCCI official told PTI. Yuvraj Singh Retires: 3 Times When Yuvi Changed the Game with His Fielding.

"If Sehwag can play overseas after retirement, I don't see an issue with Yuvraj doing the same. He is a retired player now and his contribution to Indian cricket is immense and should be valued always," said another BCCI official.